Moma is spending almost its entire second  floor to exhibit Sigmar Polke, who is considered as one of the most experimental artists in the last century. The show covers nearly five decades; the amount of works are numerous; the medium widely varies, which includes painting, drawing, printmaking, film, photography and film, among many others. If we only talk about the body scale of the artists’ work, it has been really impressive, which delivers a very clear message--this is one never be tired of making new work.

The works in the atrium give the audience the first impression, which include a sculpture, several large scale paintings and a film. The large scale work name “Season’s Hottest”(2013) is made by mixed fabrics on wooden frame is a quite late piece in Polke’s career , which is totally different from his early drawing works showed in the gallery next to the atrium. This piece has totally abandoned brush, ink or other artistic color materials which was frequently used by the artist; three kinds of fabrics collage on a empty 300cm*500cm wooden frame, which create a strong visual power, which is more about “less is more”, compared with his many other painting pieces. 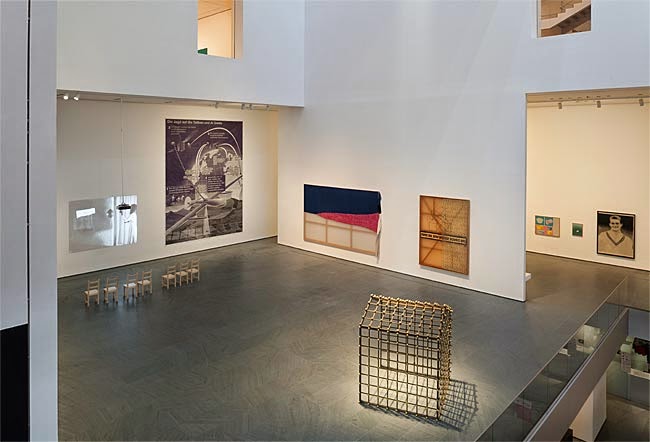 The gallery behind the atrium shows drawings of his early time, mostly from 1960s and 1970s. There are several notebooks from different periods, 1965 to 1999. It is hard to say that the small water color drawings in these notebooks are great art pieces, but for some reason I felt quite enjoyed when I read them. These rough and visually unattractive drawings record the moment  when the artist’s experimental ideas were just born in his mind, and also reflect how strong of the desire of creation the artist has. Through these notebooks, the audience can even kind track the thinking process of the artist: in the 1960s, the drawings are simply sketches by ink and brush; in the 1980s, a notebook only contains how a chair can be put on different position of a space; in the 1990s, one notebooks was fully painted by different dotes. The curating of displaying the original notebooks and digital images together also helps the audience to get the full picture of these under-table ideas. 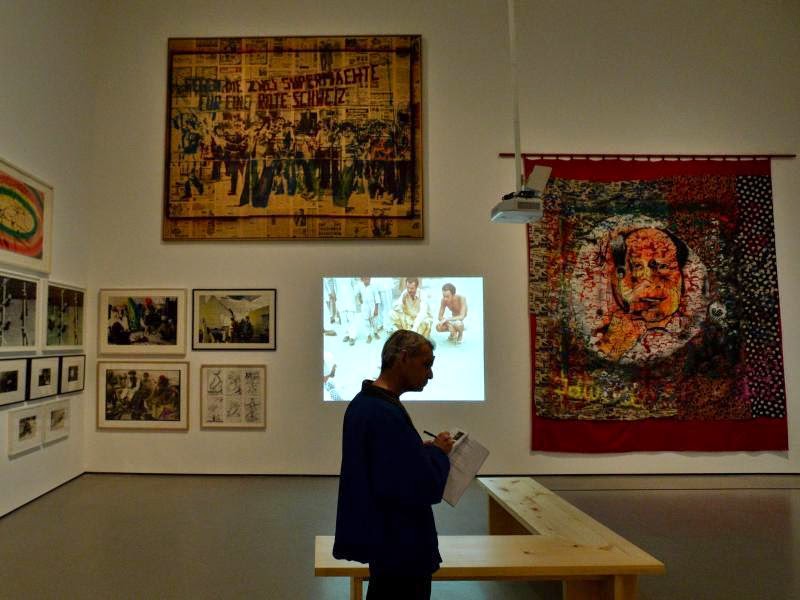 Visiting the rest galleries, it is really surprised to see how wide of different media and subjects the artists has explored. In the gallery six, there is synthetic polymer paint using the image of Mao from 1972, when Mao was frequently in the news and pop-art works; on the wall of somewhere, there is a collection of pink photography which is experiment by placing radioactive uranium on photographic plate and further treating in the printing process from 1990s, when the atomic energy had been the new hot issue because of the Cold War;  in the last room, the recent work covers a four-channel slide projects from 2000, several enamel on polyester works, and a digital slide show of the commission work for the windows for the Grossmunster church in Zurich, which was the project he worked until one year before death in 2010. In this project, he worked with local stained-glass artisans, and stained-glass was right his major when he was a young man before he went to art.

Making a label type conclusion for the body of work by Sigmar Polke does not really make sense. The numerous works in his whole life tells a fact: just like one of his favorite materials --potato, if there is a little sunny and water, the desire of creation just grows and blooms. All the things around him, different materials, hot social matters, scientific issues and many other things all became his nourishment. In terms of the definitions and classifications, the panel discussion of Moma gave a nice title “Who Cares if it’s painting.”
Posted by Unknown at 1:50 PM 3 comments: