We visited the Bric Biennial. Of all the works shown, I would highlight Animalistic Punk – Fish by the Chinese artist Yi Xin Tong. It is a tapestry which represents a collage of images from Tv of fishermen. It combines images of current fishers to reference the fishermen's revolution in the Song dynasty, which was an era of Chinese history between 960 and 1279.

This transdisciplinary artist uses art as a space for activism and global communication, specifically about the censorship of the internet by the Chinese government. Through his work, he reflects on media control and abuse of natural resources in China.

By presenting a tapestry, the artist refers to a historical and ornamental art related to high culture. By doing this, he is appropriating a high culture format to display a history of the working-man, elevating their stories. He uses this traditional technique to attack the idea of art as an institution.

I wonder if, in this piece, the visual appearance becomes more relevant than its conceptual meaning. The message seems distorted by the ambiguity of its images. The intent of the work seems to be hidden under its image, which looks more concerned with achieving its validation as a work of art by taking advantage of a ”cool” aesthetic based on new technology, but with a clear intention to connect with art history. In any case, the work caught my attention because its appearence, and that is the most important thing these days, no?
Posted by santiago giralda at 8:54 AM 2 comments:

Nari Ward dedicates his career to discovering and examining the history of slavery. He tries to use his innovative creation to connect the tragic events in the past with current life, showing how those memories in history embedded in modern America. One of his most recent work,  “Spellbound” is a great example. Decorated with hundreds of keys, the piano is not a simple piece of instrument anymore. It has been turned into a book without words, carrying stories and historical events happened in inaccessible or disused places that have been forgotten. Nari Ward added a short film on the back of this impressive object to reveal those hidden stories. The film focuses on presenting people and places in the African-American community in Savannah from cultural aspects. Nari offers us the key to touch the deeply buried memories that we should not forget, making "Spellbound" the most moving piece for in the exhibition. I heard people saying that this is a piano you don't know which key is the right key to play in. 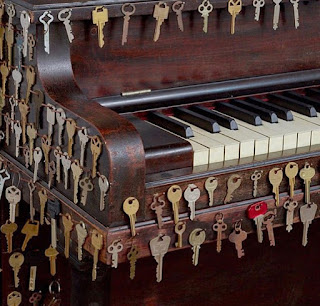 Posted by Jiacheng Huang at 9:40 AM 2 comments:

Nari Ward has an impeccable approach to art. “Nari Ward: We the People,” comprises more than thirty paintings, sculptures, installations, and videos.The curatorial aspects of Ward’s exhibitions are deeply influenced by his innovative ideas and research. Ward managed to look into America’s history and curate his art to capture people’s ideas and feelings of the real world. The artworks and objects are developed intentionally to allow room for interpretations. The exhibitions are organized neatly and artifacts arranged properly for easier recognition by viewers. The chosen positions of the arts and installations are such that they attract people’s attention, which is an indication of excellent curating skills. The curatorial premises of Ward’s exhibition play a vital role in passing information to the public.The salient message passed by “We the People” artwork borrows its essence from America’s constitution preamble. The word “we” in the artwork therefore represents everyone under the Constitution's protection. Nari Ward uses his art to demonstrate the impacts of gentrification on democratization in the United States. Ward used “Iron Heavens” as a visualization to create a sky from a combination of pans. Bats and pans in “Iron Heavens” symbolize violence with the imagery borrowed from ancient traditions. Forms such as sculptures and architecture, along with language, may have been used to express power, identity and other factors that form the basis of people’s sense of belonging. He also addresses social issues affecting Americans through his curators’ creativity and innovation. 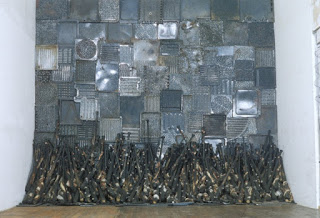 “We the People” Amazing Grace, Nari Ward, the New Museum 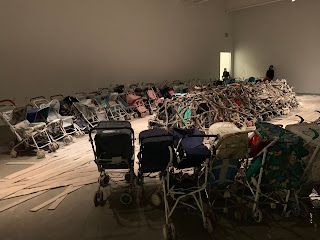 Used baby strollers, fire hoses, baseball bats and other abandoned objects create Ward's amazing installations. Ward is good at transforming daily objects into incredible art pieces.  The installation creates a special connection of personal memory and sensibility.  The installation, Amazing Grace, is an interactive design. Fire hoses create a route that people can walk in between an arrangement baby strollers. The spot lighting gives a more directional circulation on the installation. The thesis of death and hope is big and abstract. However, Ward by applying different physical materials and sound successfully present his view of the death and hope. Amazing Grace was originally at the New Museum installed at an abandoned gas station. Instead of using the old site, in the new location the special lighting design at the New Museum helps people to focus on the installation itself.
Posted by Haonan at 11:15 PM 2 comments:

The CryptoFuturist and The New Tribal Labyrinth in Pioneer Works

The CryptoFuturist and The New Tribal Labyrinth by Atelier Van Lieshout at Pioneer Works was awe-inspiring. It was full of immersive installations and industrial machines. The artworks and space came together perfectly, so I imagined the place was also part of the work. I guess because of the high ceiling and brick walls.  The sculpture contains familiar domestic elements such as a kitchen. There were a toilet and chairs itself to the large industrial installation so the collision from the correlation occurred between familiar everyday objects and machinery atmosphere. According to the press release, the sculptures have "a visceral desire to return to the beginning of industry—the origins of Western culture, wealth..." The grand scale the objects combined with the sound such as from swinging pendulum led people to experience the tension between their bodies and the sculptures. The feelings of walking carefully between the small works and massive columns recall any fundamental problems happening in society today, the past and the future such as a DIY nuclear reactor or external political movements. I loved to look around the amusing furniture sculptures such as lamps and desks suggesting human body were displayed everywhere on the floor. For example, there was a table with a big rock on the bottom which reminds me of bigfoot and sculpture with an ellipse shape hole which suggests a mouth.

A matrix of black light tubes taking up the entirety of one of the four walls in the gallery fills the room with a hazy, unnatural, neon purple light reminiscent of a future or neonoir via Blade Runner.  On other walls hang canvases covered in deep black hues. On the ground, in the center of the room, is a square made up of loose broken glass.  As you move around the space the ubiquitous purple light refracts in the shards of translucence.

Subtle shifts on the surface of the large all black canvases reveal words. Pure. Very. New. The title of show as well as adjectives that when added to the word Black forms the names of specific paint colors. Black painted portraits of African Americans hang in another room while a Nina Simone performance of Black is the Color of My True Loves Hair plays on a multi-television installation.

The show uses a variety of visual signifiers to create an atmosphere that asks us to evaluate and investigate the varied meanings and experiences ofBlack and Blacknessas both cultural concept and lived experience.  Like the reflection of the black light on the shards of glass and the black surface of the paintings, these meanings become entangled and refracted, asking the viewer what is “Black”? 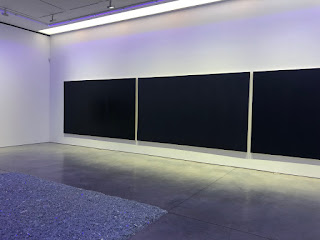 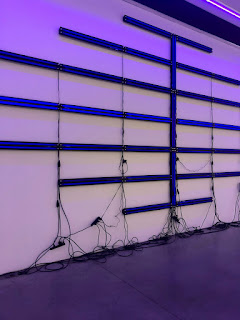