Neo Rauch At the Wall Exhibit at David Zwirner Gallery

Rauch’s paintings are like windows into fantastical, dream-like worlds. The large scale parti-colored paintings depict visual conundrums populated by figures, animals, and bizarre hybrids. Some of his paintings like Der Felsenwirt (2014) and Marina (2014) have a collage aesthetic because of the way he composes separate elements together, generally ignores perspective and scale, and uses dramatic light, shadow, and color.
In many of his imaginary scenes the creatures appear to be engaged in various indeterminable and sisyphean tasks. In Das Horn (2004) people appear to be engaged in a ritual. One male figure blows a horn while people clutching spears surround  a modernist sculpture. The environment Raouch creates in Das Horn is beautiful and surreal in that it does not spell out what exactly is going in to the viewer but some things may still appear familiar. The narratives appear unrecognizable but Rauch leaves traces of familiarity enabling people to connect with the work at an emotional level. 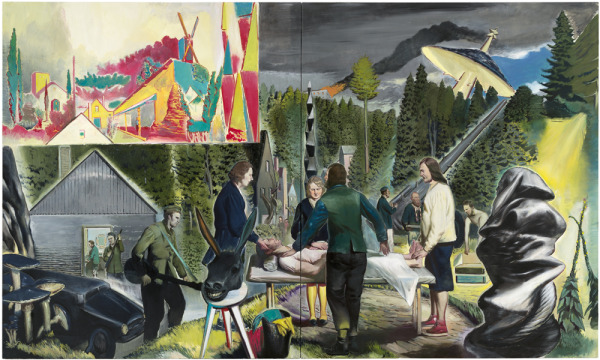 Heillichtung (2014) is a diptych three meters tall and five meters wide. In the upper left hand corner Rauch included a psychedelic rectangular insert visually distinct from the rest of the painting. It depicts a discordant arrangement of houses in vibrant colors. The insert functions as an additive compositional device that contrasts the tenebrous narrative taking place in the rest of the piece. In the rest of the painting elements including the head of a donkey, Brancusi’s Endless Column, what appears to be a UFO, a burning building, a man on a stretcher surrounded by other men and women tending to him, and men in uniform contribute to the sensation of uncertainty of what the narrative means because their relationship to each other is unknown.
Rauch’s work cannot be pegged down to be purely social realism or surrealist despite its surrealist qualities because his paintings come from real and imaginary experiences. He does not aim to shock people or depict sexual fantasy as Surrealist Salvador Dali did. Rauch describes his work as having a vital quality like a creature or animal that can be acknowledged as such but its meaning does not necessitate understanding by the viewer.