Gagosian and Richard Serra: On Environment

This fall, Richard Serra and Gagosian launched an ambitious trio of exhibitions throughout New York City — Forged Rounds, Triptychs and Diptychs, and Reverse Curve — each commandeered its own gallery space. Weighing upwards of 50 tons, these mountainous metal sculptures loom ominously in Gagosian’s galleries. Typically made for outdoor spaces, Gagosian’s decision to shelter these works of art within a gallery setting — white walls, hushed tones, no touching — is a decision to appropriate the function of these sculptures; to remove large, public works from accessible spaces and place them instead in areas where interaction is restricted. Visitors are not allowed to touch the works, but are rather asked to quietly observe. While the sheer size of Serra’s forged steel creations is groundbreaking in itself, there is not much else to understand about these sculptures except that they are large and heavy.  Within the gallery walls, these lumps of metal have no purpose and serve less as a work of art and more as a monument to humanity’s ability to waste resources at an alarming scale.

As scientists make clear the terrifying effects climate change will have on our future, citizens from around the globe are taking charge in an attempt to slow humanity’s destruction of our environment. Countless works of art using both materials and themes related to the environment and climate change have been created over the past few years. Yet Serra, an established artist, chooses to continue his work with forged steel. The transformation of iron ore into steel is an intensive process that requires large amounts of energy — energy predominantly produced by coal. If these massive steel creations were applied to a specific purpose; shelter, protection from the elements, etc…, perhaps the sociological benefits might outweigh the environmental footprint left by these sculptures. Instead; however, Gagosian — not known for its kind and welcoming nature — and Serra chose to exhibit these works inside a highly restricted space of privilege.
Posted by Abigail C at 7:27 PM 1 comment:

Obsession and excess collide in a feast of color, texture, and light in Karen Kilimnik’s 12thsolo exhibition at 303 Gallery.  The installation is set up in the Petersbuger style with groupings of small paintings hung closely together.  Sculptures of ready-made models set atop gallery pedestals stand in the center while video’s play on two walls.  The space is crowded with photo collages of picturesque country sides, paintings of Victorian manors in the impressionist style, birds, hounds and even pastel seashells.  The only action in the gallery is amid the dancers on a screen, performing The Awakening of Flora by Marius Petipa and the video The World at War, which collages black and white movies of WWII.

Kilimnik’s mixed media pieces are situated directly in the center of a rich history of European art and culture.  At first glance the work might be read as frivolous or even romanticizing of a past packed with atrocities. Yet take a step back and the work suddenly becomes a criticism of the vacuity of what we value and the excess we hoard.

Ready-made puzzles of historic landmarks stand in the center of the gallery floor, dramatic light reflecting off glitter and rhinestones applied with hot glue.  Once gallant ships carrying stolen treasures from around the globe are reduced to a plastic child’s toy adored with rhinestones and glitter.  These works point a to the impermanence of value and pointlessness of vanity.  The installation remains, titillating the senses and drawing us into the seductive world of wealth and power with the sounds, the lights, and the movement, but the obsession of a culture based on excess and wealth has left a void which feels far too familiar in our current culture. 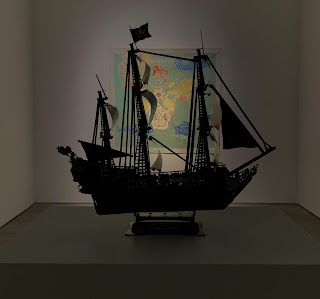 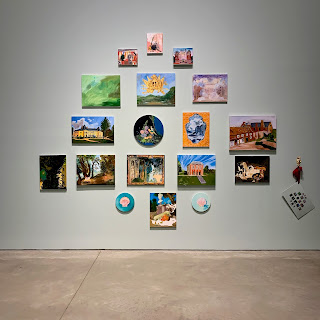