"Without A Solitary Object of Vision"

The artwork of Amina Ahmed and Samuelle Greens “Without A Solitary Object of Vision” curated by Rashmi Viswanathan presents an advanced approach to the use of humble material in installations. It can be observed that the work, which is made of paper cones, impresses by its depth and creativity. Furthermore, the authors have employed an advanced approach to art by experimenting with textures, lights, and forms. The work firstly stated that geometric forms of paper create the effect of repetition and natural waves. Moreover, the use of various shades and lights presents the audience a possibility to observe a bright and meaningful object uniquely. The installation does not introduce a central objective of the work, so the viewers’ attention is mainly devoted to the texture and shapes in general. Accordingly, thought-provoking artwork inspires the audience to learn the authors’ intention and understand their motives. The work is fragile because paper can be damaged easily; however, at the same time, it impresses by the sizes and massiveness of the conception. The installation gives the sense of motion and alteration by using fragile monotonous cones of paper. The theme of artwork “Without A Solitary Object of Vision” proved that the use of natural material might be advantageous for the creation of a unique and powerful technique.

Andy Warhol—From A to B and Back Again

Instead of focusing on Warhol’s most recognizable paintings, this exhibition spans diverse media and periods of his lifetime, including commercial illustrations, silkscreen paintings, experimental films, and some abstract pieces. The audiences are exposed to a wide range of artworks of Andy Warhol and were guided to discover new things about Warhol from perspectives in the 21st century through this exhibition.
The theme and his production skills changed through time. At the very beginning, commercial products are the main subject of Warhol’s work. Then he devoted to creating paintings of superstars. In the early 1980s, Warhol lost several partners and friends which made him trapped in deep sorrow and fear. His creations during this period, such as Skull and Camouflage Last Supper, are closer to abstraction rather than Pop. He thought more about subjects such as death and kept building his belief in religion.
In his experimental films, he recorded someone eating a mushroom and a man sleeping for eight hours without any lines. It seems that these experimental films are boring and meaningless. When we look at what is happening on social media nowadays, however, we will be amazed that Warhol had already predicted it back in the 70s. On YouTube, a film about “What I eat in a Day” can have millions of viewers. Warhol has already predicted that people are bored and will be attracted to boring things to fulfill inner emptiness.
Posted by Jiacheng Huang at 3:54 AM 1 comment:

The CryptoFuturist and the New Tribal Labyrinth, Atelier Van Lieshout

The CryptoFuturist and the New Tribal Labyrinth is Lieshout’s largest scale exhibition. All the pieces were placed in the first floor of an industrial loft space. In the center of the room, there’s a gigantic structure named Blast Furnace (2013). Its body referring to a functional furnace back in the Industrial Revolution-era used to produce steel. Lieshout decided to transform this structure by combining domestic elements such as kitchen, toilet, and sleeping quarters into it. Underneath the structure, there are also some smaller pieces displayed as decorations. However, this could be very confusing for viewers. With the understanding of the Industrial revolution-era, it’s not hard to understand Lieshout’s intention. Lieshout posits that human life is very much related to machines, and following the development of technology he brings up the discussion of whether human body as itself a kind of machine, endlessly procreating. However, this show as a whole was put together sloppily. Before viewers get to see Blast Furnace, their attention got dragged toward these two metal structure that was programmed to have a conversation about human and future. This conversation between a female and male “AI” is very detailed and resolute. Rather a discussion. It’s more of an artist statement literally on a sounds track. I appreciate Lieshout’s multidisciplinary practice which pushes the boundary of art and design. However, this show in a whole doesn't achieve his goal—to bring the discussion of relationships between human and machine a step forward. Overall this show lacks a bit of cohesion. Personally, it looks like Lieshout was trying to showcase something far more complex than he could control. Without the right context, many elements in this show could be misleading. With the massive mean piece, the smaller objects got lost in this show, so is their conversation. The topics he was trying to cover doesn’t get expressed well enough, and viewers eyes were focusing on things that have a lot less depth. It was a different, impressive show, but it didn’t reach some of the expectations from viewers. 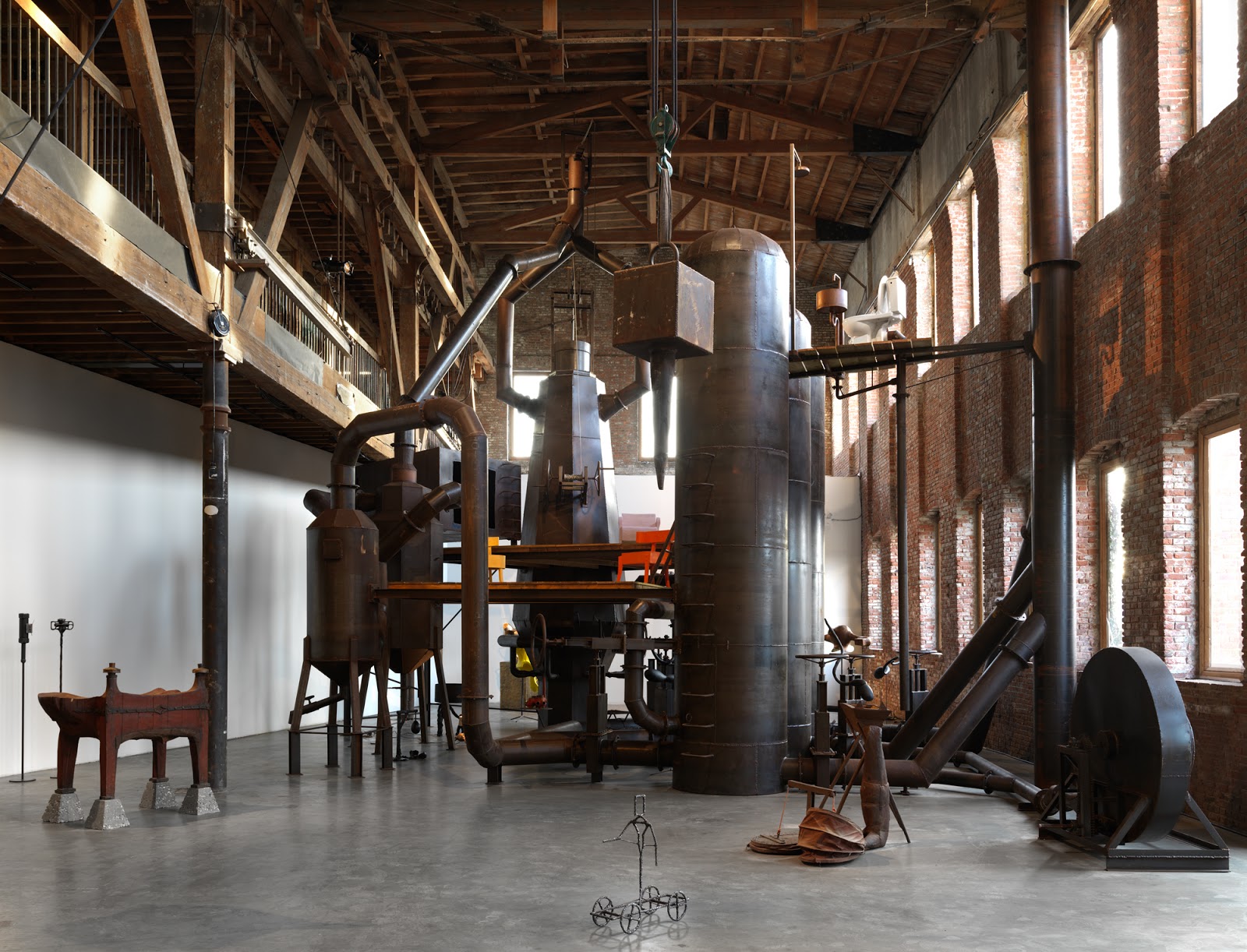 Posted by Tingyu Yan-Polly at 12:45 PM No comments:

Good Design is an exhibition at MOMA that feature some post-war designs. These designs are significant because they represent the era with material and techniques. Walking in this exhibition, everything laying on display tables, nothing really stands out at first. 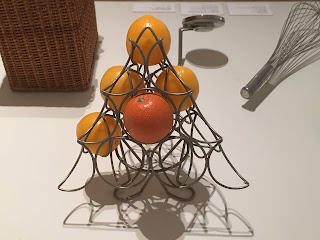 Display Stand for Oranges -Steal
Edgar Kaufmann, Jr., Fund
However, every object placed in this room has some unique and interesting features waiting to be discovered. Among all the objects a display stand for oranges got me interested. It was made out of steel. It used many circles and curves to form a triangle structure. Overall this  Stand created a stable looking fruit display structure. It has very playful energy combing its artistic structure and function. However, this object was placed among bunch of other cookers, which it doesn't really belong. With all the objects right next to each other, it's almost overwhelming and confusing for viewers eyes. Although it is very fun to look at, for a complex form like this the function being simply holding oranges was underwhelming. The material was chosen -- steel is not very welcoming to the users. Because when people see metal they don't usually think it would be related to food when it's not a cooker or cutlery. However this product was very creative, it does serve a function, and the structures are elegant. This object is displayed among a lot of other post-war period objects. And if they didn't place a couple fake oranges I probably wouldn't react this steel object to an orange holder, or even something that's functional. If this object has to stand on its own it could totally be read as an art piece. Having the fack oranges there was a very smart way to highlight its function and showcase the object.

Posted by Tingyu Yan-Polly at 11:39 AM No comments:

Nari Ward: We The People

Nari Ward weaves together collections of found objects into abstract narratives of the personal, power, and injustice in the New Museum’s 25-year retrospective Nari Ward: We The People. Ward, who began his career in the early 1990’s Harlem, primarily employing large sculpture/installation composed of materials sourced in his neighborhood, denoting a sense of time, place, and power, that affects individual
‘s as well as their community.
The titular work We The People (2011) consists of holes drilled directly into the wall forming the words “We The People” (in the same script used in the Constitution).  A variety of shoelaces hang from these holes forming a strange vinery. The words of the Constitution in correlation with the multitude of shoe strings seems to indicate the many individuals that these words should represent, despite its original context of exclusivity of any non-white male property owner.

Ward’sIron Heaven’s (1995) is a collection of charred wooden baseball bats, which fractures are dressed in cotton, and leaning against a wall of oven pans. The bats, scorched appearance and tiered structure is reminiscent of the remains of a large bonfire.  Violence is implicit in the destruction of the objects use and history. While the oven pans are individually too small to have been the instruments that burnt the bats, their histories have become linked by fire.

The massive installation, Amazing Grace(1993), takes up one large gallery. Consisting of hundreds of discarded strollers facing towards the interior of the space, a path made of flattened fire hoses threads around the strollers forming a shape that resembles the hull of a ship. Mahalia Jackson’s rendition of Amazing Grace plays in the low-lit room.  The piece flattens time, bringing together symbols and material reality of an ongoing struggle against a history of oppression. From the Middle Passage to mass incarceration, the absence in the strollers tells the unfathomable American story of perpetual loss by continued systematic injustices.

Posted by Philip LaVelle at 2:39 AM 2 comments:

Mira Schor is a New York based artist and writer. She uses her artwork to empower women. In the collection, she uses women as the main characters in the paintings. No linear perspective flattens the spatial experience. Everything in the paintings is symmetric or parallel to the adjacent elements. This order creates the interesting rhythm in the paintings. Doors, windows and walls give a sense of story behind the paints. It makes the painting like a plot in a fairytales. Some of elements are the sky color and stars in each of paintings. Light blue, dark grey, reddish purple creates the calm and vibrant feelings. Full moon, half moon, and sun make the paints more playful. Because of the scale and the appearance of color and position, it seems like paints by a young child. Mira emphasizes the short time of being a young girl. She uses the fun components to accentuate the hope, gloriousness and immatureness from a girl. For example, she expresses the desire of dress up by drawing colorful high heel shoes, long dresses and jewelry. Moreover, she uses windows, open gate and sun symbolizing the future. There are a lot of fun elements such as, fat trees, colorful fruits, penguins, white clouds and cats representing the curiousness and puerility. The paintings show a dream from a fifteen years old girl.
Posted by Haonan at 8:37 PM 1 comment:

Luke Diiorio's solo exhibition High Earth very small and had a well-constructed installation around paintings. The installation was made of plywood, and the paintings are leaning and hanging very casually against the background. I thought the installation itself was a feature of the gallery, but it was a part of the artist's show. The entire atmosphere was very familiar since it was like a construction site. The viewers had to walk on the floor that was a little unstable and could see an empty space between the wood walls. The paintings were big, colorful and minimal. They had many large vertical brush marks on white backgrounds. The canvas was made of the several vertical smaller stripes that were sewn together and then stretched. I assume that the artist painted on the sewed stretched canvas. As I read the press release in the gallery, it said the paintings are abstract landscapes. I would never know otherwise. But the paintings themselves were interesting in that the colors were vivid which contrasted to the wood walls and floors. Because of the sewn quality, the paintings looked like objects. I loved the confusion: from because it seems like 2D paintings at a glance, but by it was like an object because of inevitable uneven texture by seaming.
One thing I was disappointed by is that the artist considered the whole space as one artwork because the paintings and installation seem overwhelmed. Even though the paintings have a lot of interesting details but it was hard to focus and appreciate because of too many things I have to see in the installation. It was enjoyable to experience the construction, but I think it would be better to have fewer details for the installation such as the gap between the walls and make viewers to see more of paintings.