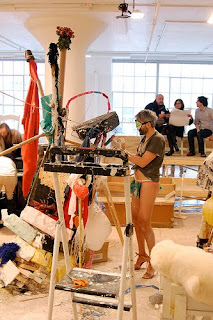 Gelitin, a performance art troupe known for creating electrifying, humorous works, held a showcase entitled The Happening of Blind Sculpture at The Greene Naftali Gallery. The piece consisted of nine performers set in an enclosed space that assumed the role of a surreal workshop. The area was splattered with paint and clustered with wooden planks, stuffed animals, and other unusual oddities. The performers—two women and seven men—were paired off in the ‘factory’ and were busy fixing and constructing installations. One member of each group was blindfolded and felt their way around the textural environment with the assistance of their partners. It appeared as though the blind workers were the ones with the actual vision for their designated projects and confidently instructed their teammates.


Urgently they worked—duct taping and nailing scraps together—and when they needed a break they would wander to a corner table where they could sit and down some liquor. They could not rest for too long though, because the queen bee—a stout man clothed in a lavender dress and black heels—would frantically check his wrist-watch and stomp around the ‘factory’ making sure each worker was staying on task. The stimulating performance was further enhanced by a blind-folded pianist who provided a dramatic soundtrack that meshed with the quirky, theatrical set. Even though the hive’s goal was unknown, Blind Sculpture was an amusing and inventive piece that ignited the imagination and compelled viewers to bare all and become part of the vivid frenzy!