Kehinde Wiley and Legends of Unity at Deitch 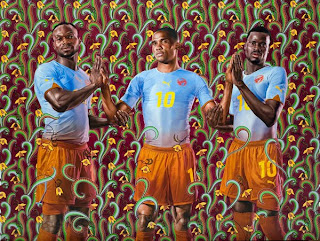 Puma’s travelling exhibition at Deitch combines Kehinde Wiley’s portraiture paintings with African patriotism and sports. The exhibition is a result of a project between Puma and Wiley that celebrates the 2010 World Cup and Puma’s partnership with African footballers. Wiley supplied designs for a limited edition line of Puma shoes and jerseys and four portrait paintings. The intent was to depict three of the most celebrated current football players in Africa: Samuel Eto’o of Cameroon, John Mensah of Ghana, and Emmanuel Eboué of Ivory Coast in a setting of harmonious unity.

The front room of the gallery showcases the line of Wiley-designed Puma jerseys and shoes. Wiley’s inspiration for the designs on the athletic wear was traditional African patterns. These jerseys and shoes set the stage as one walks up the steps into the main gallery and sees the central piece of the exhibition on the far wall, Unity (2010), the portrait of the three footballers clothed in the Wiley-Puma jerseys. Hung on another wall are three individual portraits of the same athletes, each wearing his own football jersey, and set against backgrounds again inspired by African art. There are also photos documenting Wiley’s process of creating the portraits and five videos on such topics as football in Africa, Puma, Wiley, and painting.

Puma chose correctly when they asked Wiley to represent the unity between the African nations and football and Puma. Wiley, a child with African-American Nigerian heritage, often reflects on his roots in his painting. Many of his subjects are African-American men that he poses in ways reminiscent of traditional European paintings (e.g. Wiley’s Napoleon Leading the Army over the Alps). In this exhibition Wiley adapts his process by basing the poses of the three footballers in Unity on an eighteenth-century Nigerian statue. The two outside men place one hand palm-to-palm with the central figure and the other on his elbows. This pose reflects not only traditional African culture, but also a unity between multiple African football teams.

As a sport non-lover, I think this world-relevant exhibition can be enjoyed by all as it successfully combines art with a positive message of cooperation and peace among nations. It is this combination of football, African patriotism, and fine art which makes it an excellent example for other unity-inspired projects. What better way to convey this message than through two activities humans have participated in for thousands of years: sports and art.

Posted by Rachel Correll at 9:42 AM