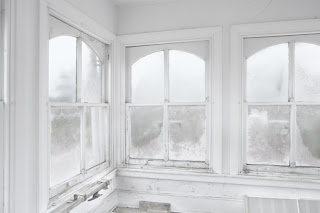 Overflow showcases three bodies of work that explore the impact of painting on both the content and process of James Welling’s photographic practice. Wyeth depicts the home, studio, and subjects of Andrew Wyeth, whose work influenced Welling early in his career. Welling digitally sampled color from those images for Fluid Dynamics, which consists of large abstract prints created by exposing wet photo paper to light. Finally, the smaller black and white photograms of the series Frolic Architecture were created by painting onto mylar, then creating photographic contact prints from the paintings.

Wyeth includes Glass House, an almost monochromatic image of two frost-covered windows in the corner of a white room, the paint on their frames peeling. This image is particularly stark, but the other photos in Wyeth have a similar sense of emptiness; the series works to depict something that is no longer there. In contrast, the stunning purple and green swirls of FD1M burst off of the wall, and the bright energy throughout Fluid Dynamics belies the subdued source of the color. Though quieter, the black and white images of Frolic Architecture take this transformation even further, giving painterly form a life of its own. Welling takes a thread of influence from Wyeth and spins it into entirely new creations, giving us insight into his personal artistic development while sketching a new paradigm of the pictorial. 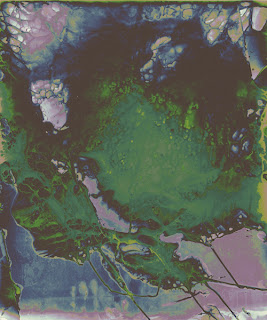