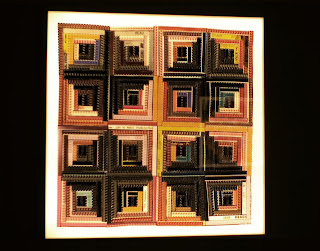 Bridging the aesthetics of quilting and the process of traditional film editing, Sabrina Gschwandtner’s “Sunshine and Shadow” exhibit at LMAK Projects gallery provides viewers with stories laced into unconventional textiles. The five-piece show consists of quilts made from 16mm footage, geometrically patterned and containing images from films relating to the practice of fabric production.

Techniques of repetition, symmetry and, contrasting tones visually tie the collection together but what resonates even louder from the work is a blurring of the line between what is considered high or low art. In Camouflage, bold chevron stripes glow against bleached footage, miniscule images of a military clothing assembly line stitched together with children’s shadow puppet playtime. While reverted to still life, the frames ultimately retain their story-telling abilities as a grazing of the eye from side to side allows the viewer to see the narratives of the films unfold. Arts and Crafts, presents an obvious double entendre, a documentary that follows practitioners of American arts and crafts taken apart to create a quilt divided into quadrants, dark diamonds sitting heavily over sunset-hued concentric squares. And while the big debate pitting artistic expression versus skill may persist beyond the exhibit’s quintet, Gschwandtner’s stance is clear. For in the capsule that is her show, her greatest strength is in showing that sometimes, art and craft can be one and the same.
Posted by Reggie Aquino at 6:47 AM