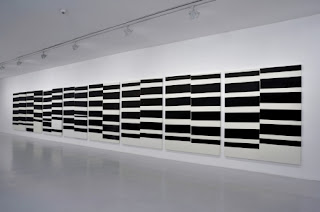 I Can See His Aura:  Wade Guyton @ the Whitney

The Whitney Museum of American Art plays host to Wade Guyton, in a midcareer survey . Guyton, a  38 year old, New York based artist, utilizes banal and ubiquitous technological means of production -- Microsoft word, Adobe photo shop, Epson inkjet printers, etc. – to quote, imitate,  and playful allude to mid-20th century abstract painting.   Yet, his spacious and well organized survey feels less like a longing for the glory days of minimalist abstraction, when non-expressive, black and white pen stripe paintings were painted by hand – Frank Stella  or when architecturally scaled  stripe paintings alluded to Parisian awnings  --Daniel  Buren, and more like a liquidation of the two. Or better still liquidation in general, Guyton uses an “Epson touch” to survey the history of painting, Ellsworth Kelly’s black and white painting Cite, 1951 was given a prominent reiteration by Guyton, in a multi-panel, Epson Ultra chrome inkjet painting that measured 88 x 157 inches. 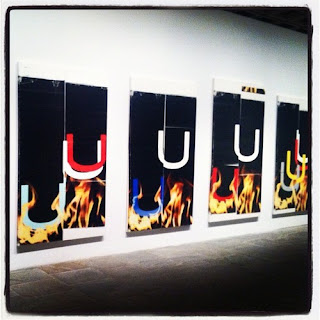 In Guyton’s painting: scale, muted color, proximity of multiple panels  all play a prominent role in Guyton’s survey. The exhibition begins with a somewhat standardized row of black on black pen strip paintings all of which contain digitally printed flames that rage upward from the bottom edges. The letter U floats within the flames of each individually printed panel, though the color, location and amount of U’s  differ from panel to panel.  The white space that is created in between these multiple black panels is reciprocated in the panels themselves, due to a white line that vertically bisects these predominately black paintings.  This reciprocity between the sliver of white contained in the painting and the larger expanses of white from the wall that get exposed from panel to panel goes a long way to differentiate Guyton’s work from someone like Kelly. Since Kelly wanted his paintings to function as architecture not oscillate between them.

By grasping Guyton’s work from the perspective of ‘space’ these mechanically produced paintings deal with pictorial and architectonic space in an almost enthralling way.  Ma is a Japanese term that describes intervals between the apprehension of objects and the acquisition of conscious knowledge; it can be simply described as the space between things that allows for mental comprehension of things.  Ma is thought of as a sacred ‘conscious space’ that develops from acute observation. Whether or not Guyton had Ma in mind when producing his works borders on the side of speculation perhaps even its wild side; yet, his works do demand a certain level of perceptual engagement.  And if one is so inclined lines, ostensibly, become three dimensional and rise above the surface while others recede and fade into a cloud of digital fuzz. 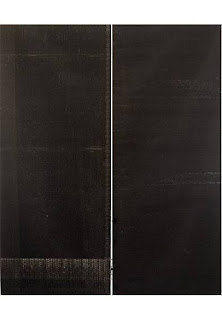 But undoubtedly, Guyton’s work, if ever mentioned in regards to transcendence will be done so in relation to a cynical or ironically playful approach.  Yet, by reducing the work to postmodern irony the social value or the cultural significance of the work is displaced.   That is, if conclusions can be drawn about the organization of perception in relation to a given historical moment based on the art produced with in it, Guyton’s work is a clear sign of the times.    If viewed through Walter Benjamin’s aura, a term he describe as “the stripping of the veil from the object, the destruction of aura…”  Benjamin rested the decay of aura on two circumstances “the desire of the masses to get closer to things and their equally passionate concern for overcoming each things uniqueness.” Benjamin continues, “The uniqueness of a work of art is identical to its embeddedness in the context of tradition.”

Benjamin’s last quote serves to explain Guyton’s excessive use of art history, which differs from artist of past generations who utilized techniques of mass production, based on representations embedded in popular culture.
Posted by DeShawn at 10:22 PM