Austrian artist Hans Schabus presents in the Simon Preston Lower East Side location the site specific body of work profoundly titled Lower East Side. By using his obvious wits and humor the artist manages to address both conceptual questions regarding barriers and exclusivity within the art world, but also to facilitate an intense physical experience, since the objects that he is presenting in the gallery are extremely dominant within the space, forcing through special composition, size and scale an interesting interaction with the viewer. There is weird sense of awkward discomfort since the works are too large to be seen, at least in such a small space, and therefore they can be experienced by the visitor more like sculptural walls than images. 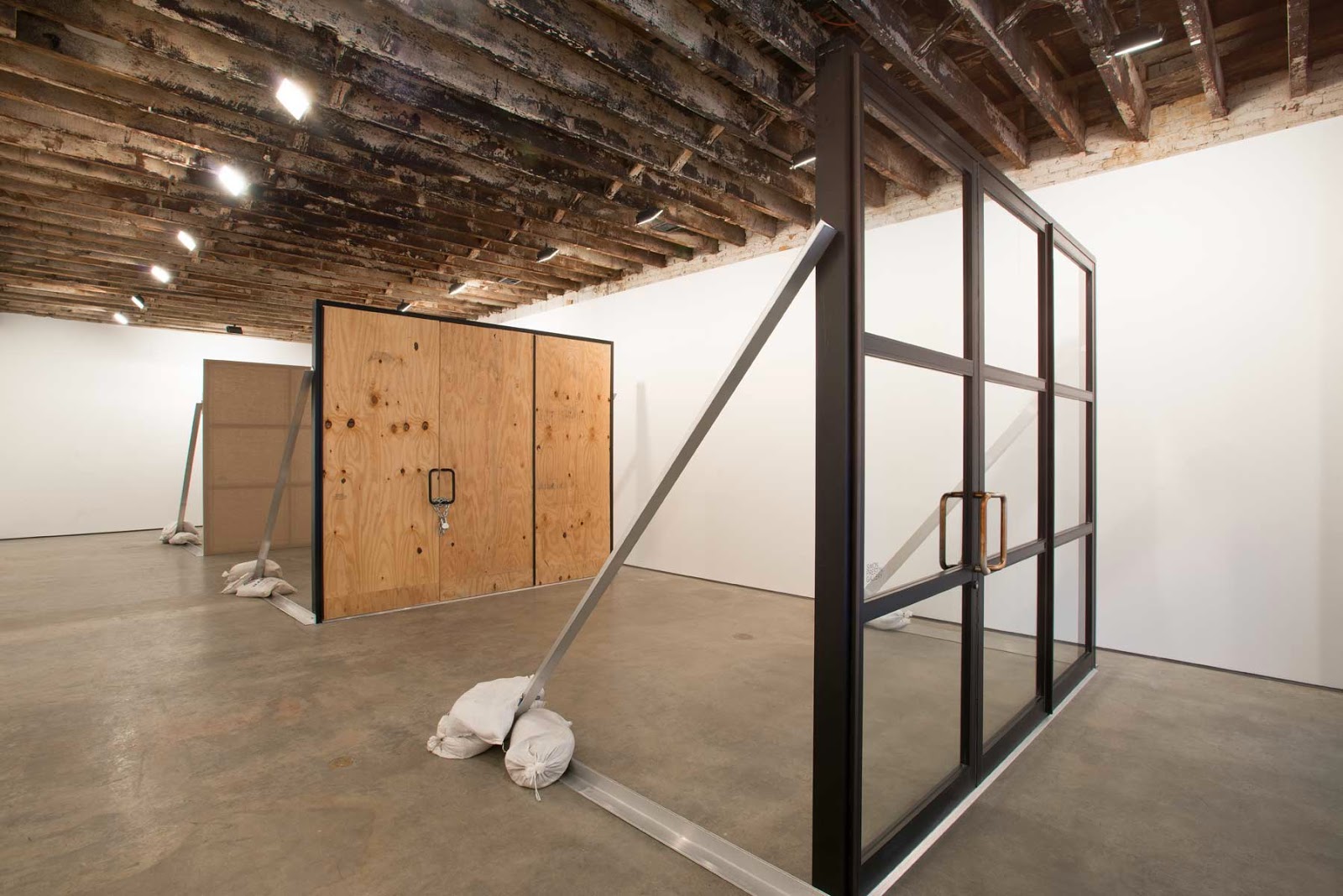 Being consistent with his interest in principles of order in architecture and society and the role that architectural structures play within the social realm the artist exhibits three facades, three sculptural copies of the gallery's glass entrance. All three, standing in a row, are facing their original, blocking the viewer entering the space instead of inviting him, reversing the function of an entrance. The first one is an almost identical copy constructed by the same material as the actual storefront. The second one, built out of plywood is the structure that was actually used by the gallery when the glass entrance was removed from its original place to become a readymade sculpture for the booth of the gallery in the 2013 Art Basel Miami. The third one, standing last in the row, is a 1:1 scale drawing of the entrance on a canvas that becomes a sculptural construction itself as it is presented as a free standing three dimensional object, the same way as the other two constructions do.
On the walls of the gallery the viewer comes across photographs (digital c-print, 9 x 12 in.) documenting the process that the artworks have been through, their previous life as functional objects or in the case of the canvas as a work of art that was meant to be site specific, but was built in a different space (the artist's studio in Vienna) and only achieved its site specificity when it encountered its alternative versions, the ones that once were functional. Through that the artist creates a narrative that seems potential fictional to some of its aspects. Therefore the audience becomes intrigued by the back story, seeing the physically powerful structures, artworks by themselves, as ephemera of an action, witnessing an intriguing duality. The same way the works function all together, each one individually is both real and unreal, public and personal, inside and outside.

By reversing the function of a gallery's storefront, creating blockades instead of entrances the artist presents a view at the art world's power structures in an attempt to undermine and question them. Even if the galleries in general and Simon Preston in particular do not follow the pattern of physical intimidation through architecture that other institutions(museums, libraries, et al.) do, the gallery as a power structure in the world of art can often become a blockade, a barrier to self expression. This condition creates a sense of discomfort to creative individuals who will often search for ways to present their work outside the tight circle of the gallery system. Hans Schabus manifests this discomfort in physical space and in the process creates an intriguing environment, worth experiencing.