Counter Space: Design and the Modern Kitchen - September 2010 - March 2011 at the Museum of Modern Art 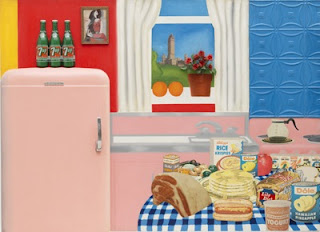 Upon entry to Counter Space: Design and the Modern Kitchen, it seems like just a kitschy and fun design exhibition. It is essentially a design exhibition, but the presentation goes beyond mere form, space, and utility. It encompasses the kitchen on every level, from its uses and physical elements to its meanings and roles within society.

The impetus for this show was the museum’s newly acquired Frankfurt Kitchen, designed in the mid-1920s by Grete Schütte-Lihotzky. Her design was based on contemporary theories about efficiency, hygiene, and workflow. At the turn of the 20th century the western world became preoccupied with progress and technology. Many new materials and innovations were being developed, including those for the domestic arena. Within this environment, society took on the new kitchen with enthusiasm. Visitors to the exhibit see this celebrated in a variety of interesting dishes, containers, utensils, furniture, and appliances. Virgilio Forchiassin’s Mobile Kitchen Unit, an all-in-one, fold-up kitchen, is particularly intriguing. 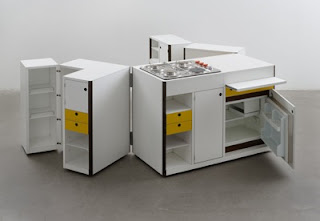 Alongside the components of design, this exhibition also presents works from practically every other artistic medium. Films from the 1930s-1980s show happy families in black and white reveling in the kitchen's domesticity. Photographers Bruce Davidson, Lucas Samaras and Philip Lorca DiCorcia, take portraits of people in kitchens while Cindy Sherman stages herself in a kitchen, playing cinematic female roles in Untitled Film Stills. William Eggleston’s color photographs present banal, yet compelling views of the insides of a freezer and an oven. Irving Penn’s Frozen Food, textural and vibrant, also has a prosaic effect. A Daniel Spoeri sculpture juts out. Looming above eye level is a chair supporting a plank of wood called Kichka’s Breakfast I. One cannot help but smile at Tom Wesselman’s pop collage, Untitled Still Life #30 or David Shrigley’s To Make Meringue You Must Beat the Egg Whites Until They Look Like This. 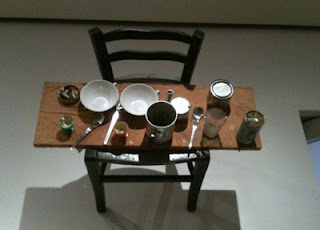 The selections mentioned here are only a fraction of the many art forms used to trace the functional and societal roles the kitchen has employed since the early 20th century. Design, photographs, video, sculpture, advertisements, posters, and packaging, illustrate the kitchen’s form and utility as well as the deeper issues regarding the domestic role of women, family life, and consumerism. The mood of the display ranges from mundane to profound with a fair bit of humor mixed in. Overall, it is a delight and if you have the chance to see it, its well worth the trip.

Posted by Jessica Kloville at 6:31 PM