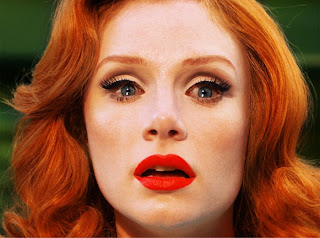 Photographs from the real world, studio manipulated images and appropriated pictures from pop culture, cinema and fashion, embody the work of this exhibition, New Photography, presented annually at MoMA. Roe Ethridge, Elad Lassry, Alex Prager and Amanda Ross-Ho are the four contemporary photographers highlighted in the 2010 exhibition. Collectively, the thirty-six works on view blur the distinctions between images of all classifications, creating an exhibition in which imagery is intended to move fluidly between editorial photography, film and fine art.

Working in the most editorial way of the four artists, Roe Ethridge creates new images from those already in print. Comme des Garçons Scarf with Glass Plate, 2010, borrows an image of the high-fashion, checked scarf and juxtaposes it with a banal photo of a white dinner plate laid digitally on top. Similarly, unrelated pictures such as a New York Times photo of a model, taken at Chanel’s 2009 runway show, are hung next to a blown-up image of a pumpkin sticker.

Elad Lassry’s work is heavily centered on generic things with no relationship to one another—bottles of nail polish, baguettes, ceramic figures, bell peppers and hats. You also find portraits of the artist’s friends along with a picture of celebrity Goldie Hawn in Laminated Structure (For Her and Him), 2009. These unrelated images are housed similarly however, within brightly colored frames, drawing attention to the vivid hues seen in all of Lassry’s photographs on view.

Alex Prager’s work, influenced strongly by fashion photography and cinema, features women in wigs, considerable amounts of makeup and vintage clothing. The work highlights the exaggerated emotion seen in films such as The Red Shoes from 1948, contrasting with the emotionless images presented by Ethridge and Lassry.

Amanda Ross-Ho’s work is the most distinct of the exhibition. Her images are presented, in many cases, without traditional frames but rather attached to Sheetrock and wood structures. The artist incorporates images taken by her photographer parents alongside found pages from photography textbooks confronting the duality of the craft of photography with its commercial side.

While the technical aspects of the four artists’ work are quite exceptional and seductive in their super-glossy finishes and vibrant hues, the disjointed subjects that permeate throughout the images never seem to be reconciled. It appears to be the artists’ intentions to prompt the viewer to recontextualize the images that we are confronted with everyday in their new mode of presentation, however advertising images seem to still remain as such and film stills appear unfazed by the new context in which they are viewed.