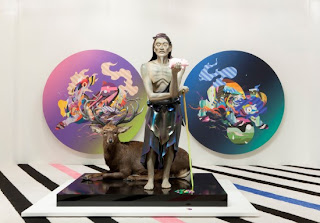 East Meets West, a spoonerism indeed, is the epitome of the vibrant world interplaying East/West esthetics into one exhibition. The New York-based Japanese artist Tomokazu Matsuyama displays more than 20 pieces of vividly colorful paintings and installations in his second solo exhibition in New York City. Clearly, his intention of a homogeneous display reiterates the absolute necessity of understanding that the world is one backyard of combined signifiers.

Upon entering a Joshua Liner Gallery, Matsuyama’s large-scale canvas, Toy and Candy, covers the entire crisp, white wall; set apart from the rest as the key attraction. Exposing an historical defeat in both traditional and modern graffiti, the canvas is made of juxtaposing bright colors of acrylic paint and artistic techniques of slicing the proportional figures into one canvas. Further, Money Talks, entertainingly displays the ascetic Monk Basu Sennin wearing a metallic robe holding in his hand a pink piggy bank, shiny plastic coins decorated with happy-sad theatrical faces, and the salvation deer; all of which emphasize the contradiction between aged Eastern spiritualism and modern Western economics.

Overall, there is no doubt that Tomokazu Matsuyama creates a rich cultural collision between imbedded Japanese roots and modern life as a universal language. Within the exhibition, a unique eastern experience awaits the visitor whereby a sign at the entrance affirms Eastern social behavior: “Please wipe your feet before entering!” The symbolism in Matsuyama’s pieces is astounding. It does not stop in the art itself but reaches out to us in the title, East Meets West!
Posted by Rana at 6:29 AM