The first two questions that arise when I look at an artwork are always the same: what is it and why is it made ? In Thomas Hirschhorn’s Gramsci Monument a third question triggers irritations: where? 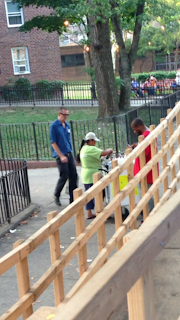 The Gramsci Monument is dedicated to Antonio Gramsci, a politician, philosopher and one of the founders of the Communist Party of Italy. Hirschhorn calls himself a fan of Gramsci, who “was a hero and who was ready to pay the price for his commitment”. Hirschhorn refers to the time that Gramsci spend in prison after Mussolini survived an alleged assassination attempt in 1926 and enacted new restrictive laws. Hirschhorn, in his informative monument, focused on the 32 notebooks that Gramsci filled with notes during his ten years in prison. In the classical monument he reproduces Gramsci as a portrait on a wall.

In the exhibition brochure, Hirschhorn questions his installation in regards to “the Universality and Autonomy of Art”. His decision to locate the work in the Bronx is based on an encounter that he had with the people from the Forest Houses after speaking with other communities. The mission of co-existence and co-operation “asks for help not to bring help” claims Hirschhorn. The problem of the installation is the contradiction between Gramsci’s communism, the monument to him, the location, the people that are involved, and the visitors’ experience: the kids are occupying the computer lab playing video games, the library is empty and the lectures are only attended by the art going public.
Posted by Unknown at 6:18 PM