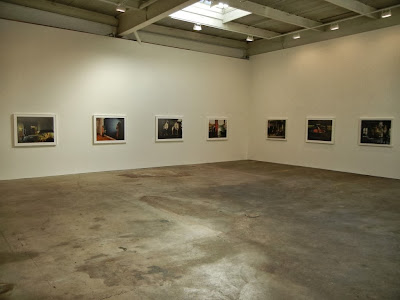 Taken in Los Angeles from 1997 until 2008, Philip-Lorca diCorcia’s Hustlers series include total of thirty-six photographs. Neatly framed in white, his image carries portraits of prostitutes in the neighborhood of Santa Monica Boulevard. The figure’s dignified stance expresses immense amount of self-confidence. The title holds information about each subject's name, age, hometown, and the amount of money Dicorcia spent on each shoot.


The mysterious and fictitious quality of his photo first intimidates the viewer then causes curiosity to wonder who they are and where they are from. 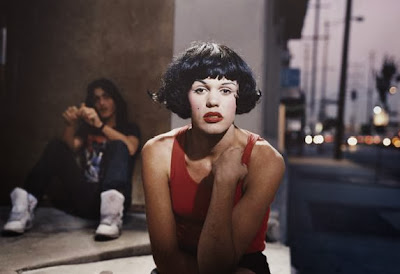 Philip-Lorca diCorcia. Marilyn; 28 Years Old; Las Vegas, Nevada; $30. 1990-92.
The series is composed of portraits of male prostitutes; Most of the subjects are staring directly into camera while displaying a bored detachment from their naked surroundings. It is apparent that artist wants to maintain a certain distance from the subject matter.


Most of times, Dicorica selected public places gas stations and bus stops as his backgrounds but occasionally, he also placed models in private places like motels and its interiors. The artist confessed that shoot was almost always planned ahead. Only after completing the preparation would he start a real shoot. Stipends equivalent to a charge for prostitution were given to a model in exchange afterwards. His prearranged idea is heightened by the use of artificial light, creating an uncanny tension. This visual composition offers a cinematographic quality.
Posted by Unknown at 11:52 PM