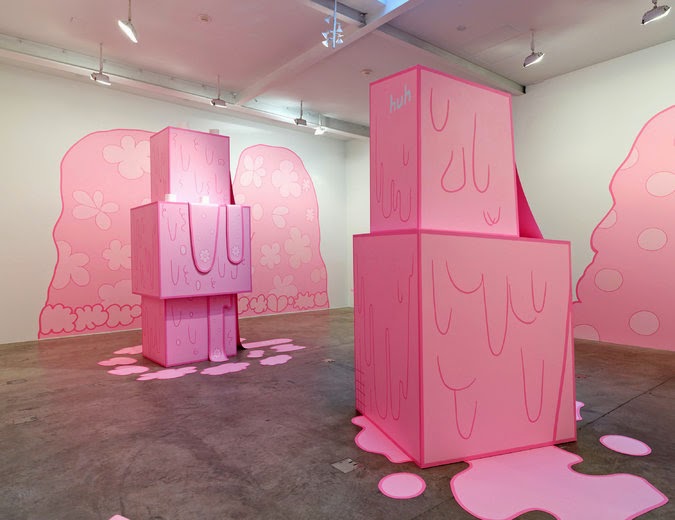 Lily van der Stokker’s cartoonish Huh show currently on view at Koenig & Clinton is both a soothing and fun experience.  The solo exhibition, an installation of all large-scale pink three-dimensional objects, globular-shaped wall paintings, and matching pink custom-made furniture presents a greater discussion about femininity, beauty, and vacant optimism as well as relationships between artists, critics, and equality between the sexes.
At first glance the room is an almost an overwhelming blast of saccharine cuteness, however there are underlying subtle messages of deprecation throughout the show. A pink cloud-shaped retail sign affixed to the wall stating: only yelling older women in here- Nothing to sell is one message in particular breaks up the seemingly calm feeling of the room making a bold statement on being an older female artist today. The large wall paintings that engulf the space also seem to communicate with each other in the context of the exhibition space. For example two large pajama inspired blobs stand side by side with pink bubbles stating both nice being here on the right side and nice being here on the left side. At the center of the gallery the large irregularly shaped box sculpture is covered in doodles, perhaps referencing pieces of hair, as well as pink flowers and looks to be oozing cartoon paint on to the floor.


Huh plays with the comforts of feminine decorative flatness while making direct references and statements to the art world, but does so with graceful humor boldly requesting that the viewer question both the substance and seriousness.
(Image source: Jeffrey Sturges/Koenig & Clinton, New York)
Posted by Scotlan at 9:11 AM