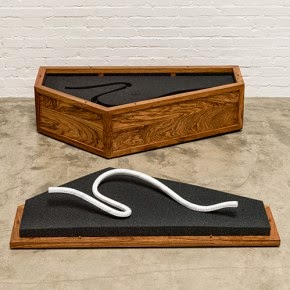 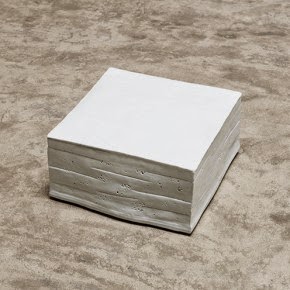 Ai Weiwei’s recent show presents Rebar Casket and Marble Rebar(2014), Tofu(2012), and so forth. This exhibition recollects the disaster of the 8.0 magnitude earthquake in Sichuan province, China on May 12, 2008. Even though these works are made recently, they bring up a topic of the Sichuan disaster six years ago by asking a question: what changes occurred between 2008 and 2014?
A series of Rebar Casket and Marble Rebar(2014) is an extraordinary tomb for marble rebar pieces, which are laid on the geometrical caskets. Rebar pieces are created through a full-scale replica. They replicate the steel skeleton from the collapsed Sichuan schools. The forms of rebar show tense moments of a catastrophe vividly. Otherwise, Tofu(2012) is formed as gigantic porcelain with wrinkled texture on the outside.
His abstract sculpture reflects the political and social issues from Sichuan province. Especially, these works symbolize corruption and shoddy construction behind school collapses in China earthquake. As the Sichuan schools corruption scandal, a series of allegations of corruption against officials in the construction of Sichuan schools, the proverb of  “tofu-dreg schoolhouses” emerged in the Chinese public on the online. Its satirical outspoken criticism against the government shows a change of democratic awareness.
Ai Weiwei criticizes veiling truths from his country through his artworks that he disclosed the contradictions in his society. His objective presentation toward the reality from the dark side of his country makes viewers read his cynical subjectivity.