Visiting “Yoko Ono: One Woman Show, 1960-1971” at MoMA is like having a casual conversation with the artist. Yoko Ono's paintings, sculptures, installations, and films convey the playful aspects of everyday life. From embracing beauty in the natural decaying process in Apple (1966) or the simple self reflection in Box of Smile (1972) to inviting viewer to make physical contact with A Painting to Be Stepped On (1961) or becoming part of Bag Piece (1964), the artist celebrates the notion of play. 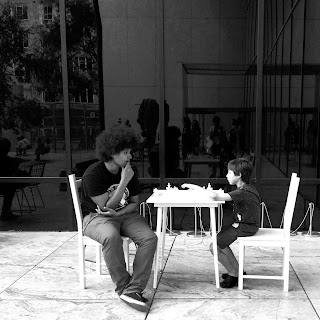 The label for the all White Chess Set (1966) is inscribed with humorous words, “chess set for playing as long as you can remember where all your pieces are.” Although the work seems ordinary at first, with a second glance the viewer realizes both sets of the chessmen are white, matching the game board table and chairs. The artist's minimal adjustment on the traditional chess transform the game into a new kind of play. Instead of playing against each other, the players work together to continue moving their own white chessmen across the board. Like the playfulness of White Chess Set, the exhibition fills the museum space with the lively spirit with Yoko Ono whispering “play with me.”