When you first enter Rodríguez Calero’s “Urban Martyrs and Latter-Day Santos” exhibit at Museo del Barrio, you are greeted with a large block of text printed on the wall explaining the main focus of the show. You are told that Calero’s large-scale religiously inspired collages “move us spiritually. The disturb and challenge us…” The language continues like this, dictating audiences’ reaction to the works in a tone that seems more applicable for an article written well after the work has been critically received, rather than accompanying the works in one of their first exhibitions. In fact, to someone who did not grow up with the experiences Calero did as a catholic minority, the language is somewhat alienating; such viewers will likely respond differently to her images of models-turned-saints. The descriptions of individual works feel better suited to a later publication than to in-gallery text that directly accompanying the original works; rather than adding to the collages, the texts leave out answers to questions the viewer may have (such as who the models are, or the significance of the patterns Calero uses) and eliminate opportunities for free response and discussion. 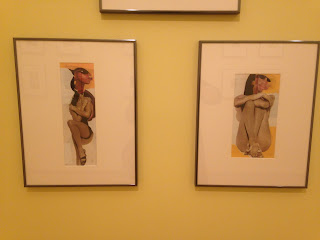 However, the second part of Calero’s show stands in striking contrast to the first. Smaller scale collages, unaccompanied by the didactic texts or overt symbolism of the religious works, create an environment that allows for curiosity and discovery. In these works, Calero not only pushes the method of collage farther than in her large-scale works by transforming her sources more drastically in these pieces, but explores the face, the human figure, the movement of the body, and even the way viewers perceive gender. Some works have a dialogue with the history of art, creating cubist faces or using antique clippings as sources, while others twist figures into sometimes-androgynous, sometimes-hermaphroditic forms that question what it means to be male or female. These works speak much more to a wide audience and do not suffer from the heavy-handedness of the religious collages. Overall, the exhibit is worth visiting to see Calero’s smaller collage works and the risks she takes in them. 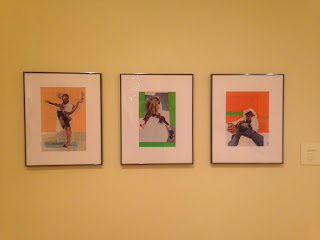