Walter De Maria filled Dia Art Foundation's Soho gallery with soil in 1977, and his exhibition, The New York Earth Room, continues to amuse viewers today. Although the installation have been shown in Munich and Darmstadt, Germany, The New York Earth Room is the only one still remaining thirty-eight years later. Like the dinosaur skeletons in the Museum of Natural History, the soil has occupied the gallery space in frozen time, disconnected from the changes of the outside world. While generations of viewers have stepped in and out of the exhibit in the past four decades, the soil stays capsulated in a uniformed layer behind the glass fence, giving a sense of sacredness to the space. 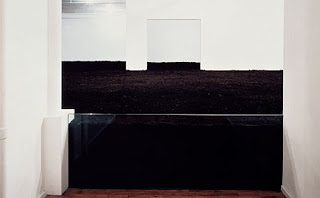 Using soil as the singular medium, The New York Earth Room provokes the power of nature in minimal expression. As the viewers walk into the white gallery space, the aroma of earth fills the humid air, strengthening with every step closer to the soil collecting behind the low glass fence. By hovering the hands over the soil, viewers would feel the cold air flowing into their skin as if the soil is breathing. The sunlight penetrates through the windows and illuminates the textural soil in different shades of brown contrasting the white concrete walls. The force of nature dominates the artificial space, providing viewers with a meditational experience to concentrate their sensory on the soil.


Located in the heart of one of the largest city in the world where the odor of solid waste and exhaust gas clogs the lungs , The New York Earth Room brings the status of soil, abundant in rural regions, to sacredness. Walter De Maria communicates environmental awareness with the viewers by ironically containing nature in a man-made structure. Perhaps one day, The New York Earth Room would be the only place to see soil, like the dinosaurs skeletons in the Museum of Natural History, if nothing is done to change the outside world.