Blockchain Future States wants you to delve into the inner workings of cryptocurrencies. The exhibit by Simon Denny explores the idea of globalization and inclusivity through non-traditional sculptures, displays, videos, and a lot of techy talk. You’re greeted by iconic images from the popular video game series Pokémon. The backs of these works, aided by the displays of key players in the Bitcoin game, introduce you to the subject of cryptocurrency and blockchain, and what it can do for the socioeconomic climate of the world.
Entering the next room, the complexity of blockchain is elaborated upon. The classic board game Risk has been reimagined as a way to illustrate the idea of blockchain as a loophole in globalization. Repurposed computer cases display multimedia sculptures exploring the topic along the wall, while a short film defining blockchain for the viewer plays on loop at the back.

Blockchain Future States is by no means a traditional gallery experience. Don’t expect to be quietly appreciating meticulously hung artworks. This exhibition commands your attention by translating blockchain, a complex string of technical code, into a work of art utilizing different mediums. Break free from your globalized code with Blockchain Future States. 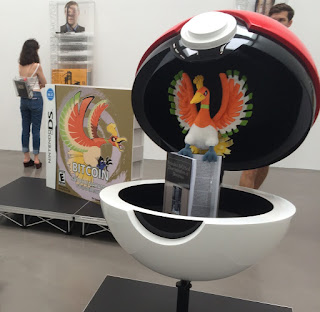