The First Viewing of Dreamlands 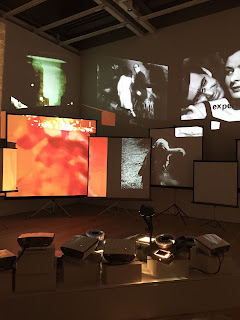 The Whitney Museum’s website informs potential visitors that Dreamlands: Immersive Cinema and Art, 1905–2016 will “connect different historical moments of cinematic experimentation” with films that span more than century.
The first film I came to was Edwin S. Porter’s Coney Island at Night. Filmed in Brooklyn in 1905, is full of filigree and sparkle.  Due to technological limitations at the time, it is a silent film. The combination of the filmed lights at night and the silence results in a quite appreciation of spectacle.  An interesting augment to the quiet pageant of this 111 year old movie is Oaskat Schlemmer’s Dar Triadische Ballett from 1922 and restated in 1970. The bright colors and occasional music in my side vision from Dar Triadische Ballett as I watched Coney Island at Night gave me more of an appreciation for the older film’s silence.
Entering the next room I came to Stan VanDerBeek’s Movie Mural from 1968. It is a collage of newsreels, glass slides, projected drawings, found film footage, and some of the artists own experimental films. This is all projected on multiple screens and surfaces. It is a lot to take in. As the films in the previous room affected my frontal vision and my periphery, VanDerBeek’s work was a relentless assault on my audio and visual senses. I was left with feeling of over-stimulation and wondering if this is what we have come to expect from our media.
The Whitney seemed to have an answer for the modern fractured attention-span with many other films and film installations scattered throughout the floor.  There are 38 in all. Some can be seen with the music and light of other, unconnected films influencing the viewer. Some are standalone immersive movies with entire matching theme rooms built around them. Each work is engaging in a unique way and is impossible to view them all in completion in one visit. Dreamlands: Immersive Cinema and Art, 1905–2016 is a show to see again and again.