Born in 1891, Alma Thomas grew through the period of racial tensions. Due to discrimination and segregation, African American artists had a tough time making themselves recognized within the art world. They came together to demand changes, calling for “Black Power.” As a result of their activism, the mainstream finally started to recognize black artists. Alma Thomas became the first African-American woman to have a solo exhibition at the Whitney Museum of American Art.
Inspired by nature, Thomas focused on themes such as trees or gardens. She used subtle strokes in Wind, Sunshine, and Flowers. Small brushes and carefully designed highlights in loose stripes create curls and curves which could give viewers a feeling of floral in her work. (As shown below)
Personally, this is my favorite one in the Black Power section. Walking through the exhibition, I was amazed by the rich color and rhythmic power in Thomas’ work. As she said, “Through color, I have sought to concentrate on beauty and happiness, rather than on man’s inhumanity to man.” Although she was discriminated and criticized for her race, gender and her abstract style, Thomas still believed creative art is independent from any labels and continued her creative process. 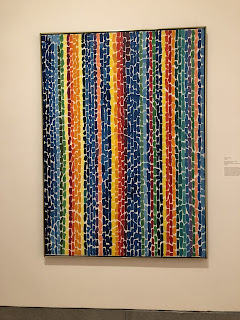 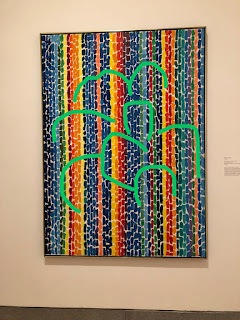 Posted by Jiacheng Huang at 8:05 AM