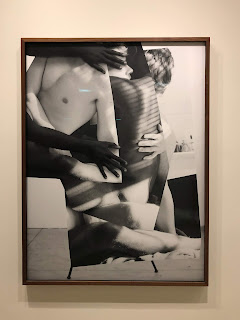 Implicit Intentions - Mapplethorpe Now displays the photographs of Robert Mapplethorpe alongside works by other photographers. Implicit Intentions shows the nude human body and form while exploring themes of sexuality, race, human rights, intimacy and identity. The photographs evoke feelings of human connection, providing an intimate view of the vulnerability that comes with being photographed. In Mapplethorpe’s Embrace, a black man and a white man closely intertwine. Shown without shirts, their arms are wrapped tightly around one another, and their heads are tucked into each others’ necks. Though faces are obscured, the photograph evokes a deep feeling of connection, love and support. Intimacy is also shown in Mirror Study for Joe, a photograph by Paul Mpagi Sepuya. The work collages several photographs of embracing and intertwined nude figures. Sepuya’s use of layering adds depth by pulling parts of the figures forward, while simultaneously others are flattened into space. Shadowed and hidden figures create an enigmatic response. Implicit Intentions is successful in capturing the depth of intimacy and relationships. Sexuality is depicted throughout the exhibition in both subtle and overt forms, as captured by Mapplethorpe and the six supporting photographers.

Posted by Samantha Morris at 2:19 PM