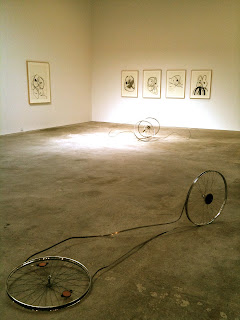 Currently on view at David Zwirner are selections from two series by Al Taylor: Rim Jobs and Sideffects, featuring drawings and three-dimensional works from the mid-1990s. Both series were originally exhibited separately in two solo shows, one in Denmark and the other in Switzerland.

Metal rims of bicycle wheels—some intact, some manipulated—are the focus of the first series which inspired its provocative title. The assemblages in Rim Jobs recall Duchamp’s Readymades featuring bicycle parts. The pieces were created just days before the exhibition opened, specifically for the Denmark show. Three-dimensional works developed from locally sourced materials are flanked by drawings that reveal how Taylor saw the space and the objects, offering the viewer a glimpse into his experimental process.

Sideffects takes over a double-sided wall shared by two rooms within the gallery. Thin, rod-like forms, varying in size from a few inches to over an arm’s length, seem to penetrate through the wall. The installation confronts the viewer as the rods line the doorway and suddenly appear as you move around the corners of the gallery.

Uninterested in distinguishing works on paper from sculpture, Taylor seamlessly leads you from the physical object to a drawing of that object in a way that prompts the viewer to reconsider how space is understood and experienced. While the work on view was not created with the intention of being shown in this specific gallery, the multiple views and ambiguous backgrounds seen within the drawings, makes the series successful—perhaps in any setting.