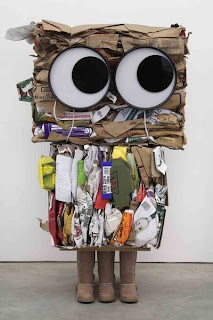 Rob Pruitt’s exhibition, Pattern and Degradation, now on view at Gavin Brown Enterprise and Maccarone Gallery, lives up to its expected excess in the wake of a nation wide recession. Both galleries are generously filled with work ranging from appropriated Hokusai prints to exquisite corpse photographs of Pruitt in the surrealist tradition. The Pandas flocked in glitter and the Amish inspired Rumspringa paintings emphasize the socio-economic contrast that exists between those within and those outside of the art world and familiarly use a pop style to express this commentary.

The most striking pieces in the show are the Cardboard Monsters, figures made out of collapsed cardboard boxes who are given real life personas and larger than life googley eyes. The figures have legs wearing work boots, Uggs, and stilettos coming out from their cardboard frame, adhering with the show’s consumerist theme while seeming to point toward a hypocrisy that exists within the current go-green trend. Though the figures are recycled cardboard boxes they still are sporting trends and hooked into electrical outlets that power their wandering eyes. The Monsters were all given first names that correspond to relevant figures such as Gavin Brown, Hope Athertone, and Jonathon Horowitz. The naming of these figures widens the gap between those included and those excluded from the “know,” giving an esoteric edge to these otherwise universally relatable figures.

While I was put off by the flashy quality of the work-to-be-bought that Rob Pruitt produced for this show, I wasn’t left feeling un-stimulated. The excesses of the exhibition left me considering and reconsidering the purpose of art in today’s market.
Posted by Nicole Rivieccio at 10:34 AM