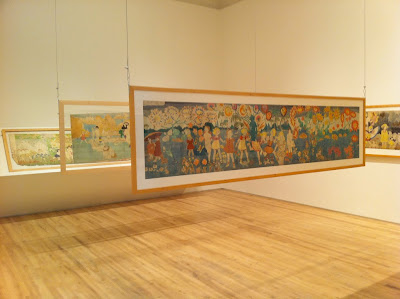 On view at the Andrew Eldin Gallery is a selection of Henry Darger (1892-1973) watercolors and collages, created as illustrations for his epic unpublished novel, “The Story of the Vivian Girls”. The untitled, undated images narrate the conflict between the Vivian Girls, seven heroic adventure-seeking sisters, and the Glandelinian soldiers, who enslave children. Self-trained, Darger created his compositions by repeatedly tracing and modifying pictures clipped from newspapers.

The majority of works on display are wide, scroll-shaped watercolors (many over 100” long), some of which are double-sided and hang in the center of the gallery. The images present a strange melding of delightful whimsy with violent toughness. Shirley Temple-esque girls with ringlets and dimples become pint-size Amazons in the face of injustice. Girls sprouting ram horns or butterfly wings populate a world where flowers grow into the clouds. Little girls with male genitalia staunchly defend enslaved children by waging bloody battle with rifles against grown men soldiers. Bright colors and repetition emphasize the artist’s fantastical scenarios.

There is also a set of small collages, portraits of generals from the story, and Volume I of Darger’s novel (an in-gallery computer shows page scans). The collages appear to be reference material for the more complex illustrations. Each consists of many paperdoll-like girls collaged around a giant central figure customized with a red uniform painted by Darger. His incorporation of inconsistently-sized figures as well as his use of dark paper as a ground is a striking departure from the other works displayed. It is possible these are character studies intended to develop his characters individual looks. They have a ghostly carefree quality—the giggling little girl heads from photographs are pasted onto simply-rendered, costumed bodies and consequently feel suspended in an unreality.

Much like cartoonist Robert Crumb, Darger, out of personal frustrations and an inability to connect with people, began creating his own. Unlike Crumb, however, Darger never intended his work for public consumption. There is a conflict between his intent—to create a personal manifestation of the characters in his imagination—and the posthumous exposure of his work. As enchanting as the images are, it feels exploitative for such intensely private work to be displayed. The pieces carry a sense of imperilment—the delicate materials are already eroding and only tiny shreds of information about their creation survive. The benefit of bringing this luminous world into the open is protection against its loss or destruction.