Detail oriented Jonas Wood once again presented his audience with a series of  whimsical, autobiographical paintings at Anton Kern Gallery . Large scale, patterned works present characters with strange gazes inviting the viewer into the scene. Simultaneously, the viewer is caught in a position of a voyeur; a witness to  everyday life’s mundane happenings. Wood’s skewed perspective, treatment of pattern and positioning of characters give this mundane element an irresistible quality of a curious story of the artist to be told. 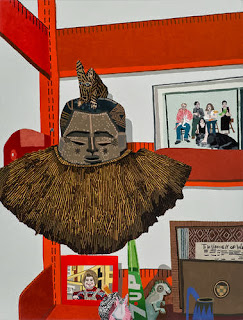 In this body of work the compositions are well structured and complex. The paintings depict  both domestic settings as well as the ones from the television scenes the artist found interesting . The most striking domestic scene is in “My Old Bedroom Shelf”, in which Wood works from the memories of his childhood room. The bright color palette, in combination with bold, textile-like patterns and semi abstract shapes, brings viewers into an experience of Wood’s memory of the space. The close-up cropping in this piece, although not typical in other paintings in the show, is particularly successful in bringing the viewer into a disorienting closeness with the artist’s rendering. Paintings that reflect the artist’s interest in television scenes, such as “Head Up" that depicts a poker tournament, only work in the context of the show full of domestic imagery, complementing scenes of bedrooms and living rooms. (edit 10/16/1013)
Posted by Anna at 8:57 PM