Sonya Blesofsky's exhibition at Mixed Greens, simply titled “Renovation,” focuses on the struggle between preservation and progress that has been waged throughout New York in recent years. Her drawings, vellum sculptures, and installations memorialize architectural details that, due to renovation projects and new construction, are in danger of being replaced and forgotten. At the same time, she attempts to transform the gallery space into something fresh and new. 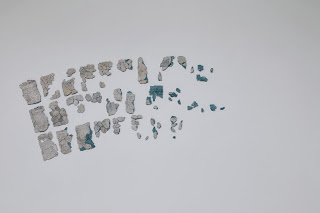 The most striking feature of Blesofsky's exhibition is the modification of the gallery space itself. Holes (presumably for windows) have been cut out of the gallery walls. White planks (with the wood grain drawn on in pencil) that recall John McCracken's sculptures lean against the walls as if the viewer has interrupted work at a construction site. Part of the surface of an existing pillar has been removed, exposing its previously hidden wooden substructure.


Alongside these alterations, details of older buildings (such as warehouses and brownstones) are presented as drawings and vellum sculptures. Fragments of a brick arch crumble into nothingness. Drawings of stamped tin ceilings line two walls, some of them fresh and white, others black and lost and forgotten. All of these artworks are ghostly reminders of pieces of New York's endangered architectural history. The exhibition as a whole manages to strike a balance between encouraging the preservation of these details and making room for the features that could become tomorrow's antiques.
Posted by Kalinova at 6:30 PM