Michael Stamm doesn't take painting too seriously. That is to say, there is an obvious quirkiness to his paintings. Working with oil and acrylic on linen and panel, his paintings are simply detailed with patterns of hair and suggestions of texture, where the surfaces are pleasingly smooth, colors well blended, and the compositions cleverly created. It's the subject of his paintings that makes the joke. The people in his paintings are simplified in form, like evolved stick figures, cartoonish in body shape and personality. The paintings frame the characters doing mundane tasks in a voyeuristic way. The contrast of lighthearted content and skillful rendering makes for an amusing show which both captures your attention and forces a smirk.

Stamm works with ambiguous narratives, spotlighting seemingly self-involved characters fulfilling their quotidian duties. The work captures moments of contemplation and self-consciousness, as if the characters are waiting for an epiphany, in the meantime seeking answers and insight from their cats. In one painting titled Forgive Me Kitty, a man stretches in a downward-dog Yoga pose, his MacBook computer screen glowing from beneath him. His cat looks at him disapprovingly as the man apologizes for his imperfections.


Stamm's style is inspired by the visual vocabulary of wellness posters, cartoons, art-deco illustrations, and Japanese prints. The text in the paintings is cleverly worked into the images, and helps to develop the geometric and modernist aesthetic while simultaneously depicting messages in curvy writing, reminiscent of neon signs. For how full his paintings are in essence, they exude a humorous emptiness, or apathy. In Just Like This Please Stamm is presenting a subtle punchline for the mundanity of contemporary living. 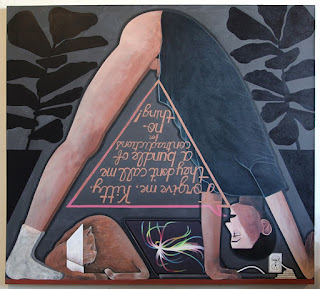