Gavin Brown's Enterprise presents a solo exhibition of Thomas Bayrle, Complete Films 1979-2007 which showcases Bayrle's paintings, films, and objects.  Along with larger-than-human scale paintings on the long wall, digitally intervened video is projected.  On another wall, two 16mm projectors run next to each other.  Sketches and studies are displayed separately on a table.

Bayrle's images seem like intricately woven patterns of micro images that generate macro pictures.  They resemble organisms made of cells in that digital images are made of pixels.  When a single cell starts reproducing itself, it may begin to help shape into a whole creature.  Similar reproductive structures are similar in the digital world.  One pixel is practically nothing, but when many of them are together,  i forms a visible and coherent image.  Bayrle’s background in textile weaving is reflected in his interest in grids and patterns.  Bayrle’s films “[make] and [unmake] of totalities out of individual bits woven together.” 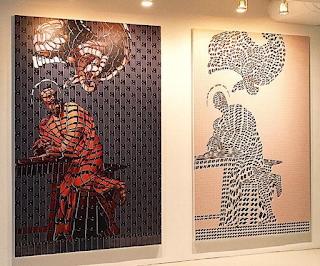 Bayrle’s recent body of works, the Caravaggio Series, both celebrates and alerts viewers to today’s hypercommunication and mass society.  In the work, iPhones form a larger overall picture that reveals the figure in the painting.  The stream of his artistic vision manifests in his visual style.