When I entered the Cindy Rucker Gallery, I though it was a solo exhibition. The two artists in the exhibition, Charles Dunn and Rusty Shackleford had similar color palattes. However, they used different methods. The Gallery mentioned that “Both artists pursue painting but with differing approaches: while Dunn uses a more traditional method of oil on panel, Shackleford employs a scanner to create a super flat surface.” The exhibition shows how the two artists pursue painting with their own methods. Both artists used neutral colors, such as gray or other obscure colors in the background, though Dunn painted figures snd Shackleford collaged images with bright colors in the foreground.
Charles Dunn was born in Ohio in 1969. He creates works that reveal the nefarious basis of everything around us. He paints incomplete figures, like eroding rocks in the rivers or seas, and he injects into these figures his feeling for color. His seemingly simple strokes are able to attract viewers. 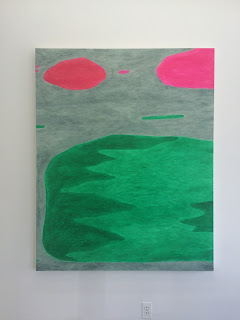 Rusty Shackleford was born in Alabama in 1987. He works with images from found magazines.  When he collages with them, he tries to reduce the sculptural form in his works. Thus, he creates C-prints and leaves only the smooth surface for his viewers. 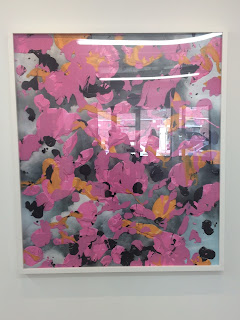 Rusty Shackleford, One of the series Digital Monotypes
Posted by Unknown at 9:59 PM