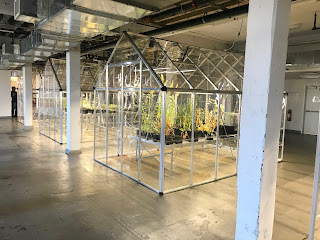 Four giant greenhouses stand in the middle of a laboratory-looking exhibition space. The greenhouses contain selections of living species of plants, algae, lichen that used to be common in the natural environments of New York City, but no longer exist in the wild anymore. The plants, the greenhouses, and the care of from the staff from Art center become an artificial ecosystem that gives a peek at the process of reintroducing these organisms back to where they used to live. The exhibition is also accompanied with photos and watercolor paintings of the exhibited species in a scientific illustrations highlighting that the audiences can only see these species through presented reproductions.

It is an paradoxical that the plants that once existed, now can only survive in greenhouses under human maintenance. Although with all the staff and volunteers’ care, some parts of the organisms in the greenhouse still look quite wasted. The fragility of these species remind us the act of human intervention and irreversible outcome of extinct in New York.