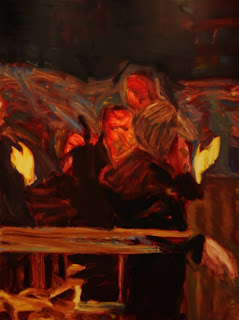 MANY WILL HEAR, MANY WILL SEE Jeremy Szopinski M.F.A. Thesis Exhibition entitled, Glory Glory, which opened on Monday, April 12th at Pratt Institute. The paintings presented on the walls are the culmination of two years of studio practice and from what’s there to look at; Jeremy has definitely not squander his time and infinitely more important, the viewer’s time. The show is strong; the paintings look great in the Steuben West Gallery light. The paintings have a common thread (which seems to be missing in most Pratt Institute M.F.A.’s shows recently) of a preacher spitting promises of salvation and mass spiritual fulfillment abstracted to the surface of the canvas. There is no presence of belief in Christianity, only the belief in paint.
The artist clarifies in his short and insightful statement that the main character in all the paintings is the faith healer, Benny Hinn. Through, given a name to the abstract and eventually monstrous figure central in each painting, it doesn’t do much to validate the compositions simply because no validation is necessary. The figure is alive with Pentecostal sweat. He pontificates from the mouth and gestures fire from his hands. You step back from the paintings and hear everything; the shrieks of the congregation, exhausted and filled with Holy ecstasy. The painting, Fall in Thy Presence has a direct link with the palette of El Greco. It’s always great to see a student paying homage to the great painters of the past. Another painting, Sold Out to the Cause, has the parishioners exhausted on a luscious red floor, the preacher standing fixated on his own power. One can’t help but see remnants of the Jim Jones cult, luckily at the opening there was no Kool-aid. With that said, the addition of two smaller paintings on Mylar seems at odds with the large canvases. These small paintings appear to be compositional studies and better to have been omitted. Their too quiet, maybe too contemplative. Spiritual reflection is not present in the paintings, just pure spiritual frenzy, the louder-the better.
Jeremy Szopinski’s show exemplifies what a M.F.A. Exhibition should be, the strongest work that fills a gallery space in a way that only that student can do. The paintings have conviction and so does the artist. Essentially, Szopinski took ownership of the space and made it work for him. Present Pratt students should be mindful and take notes; you want a great, do great work. For Szopinski, there is a return to puritan painting, appreciating paint on a solid surface for its own end. When leaving the gallery, a question arises, is this the beginning or the painter’s apocalyptic end?
RESPECTFULLY SUBMITTED,
ROBERT CARUSO
APRIL 20TH, 2010
Posted by Robert Caruso at 6:14 PM