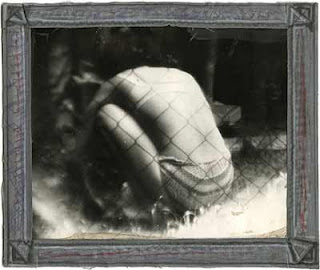 IT’S rare to find a treasure in the art world but the I.C.P. has such that in the recent exhibition simply titled, Tichy, on view until May 9th, 2010. The collection highlights over 100 beautifully strange photographs by Czech photographer, Mirozlav Tichy.
One peers into each photograph as if examining a map of the small town Kyjov itself. No Internet needed for foot fetishes, plenty of skin in this show. The majority of the photographs are snapshots of Czech Lolitas in bathing suits, others are couples on park benches with an emphasis on public displays of affection. Yet, you should not dismiss the exhibition as mere voyeurism of nubile girls; these pictures are of the people of Kyjov and of the Tichy himself. His life is his camera, his eye. Still, the uneasy sense voyeurism is inescapable and seeps into your subconscious while looking at the pictures but never worry, the I.C.P. is always clean and respectable.
Presented in regal glass frames; this gives rise to more of a time capsule for each picture than a mere perfunctory manner of presentation. Stepping back, you can see echoes of Gerhard Richter’s Atlas series. Some photographs have unique drawn pencil-line frames navigating around the edges of the picture. Others have elegant line contours around the blurry curves of the women. In addition, there are display cases to highlight his homemade cameras made from found cameras, rubber bands, bottle caps, Plexiglas, toilet paper tubes and any other discarded item he manages to find in the trash. The cameras look like remnants after a nuclear blast, gray and fallen apart. The inclusion of a documentary filmed sheds colored light to the artist and the town Kyjov. Tichy’s voice and presence, much like his photography, is fascinating to watch. He tells stories of arrests and bouts of insanity. One would never have known, this man who appears an old vagabond to be a gifted artist.
Many of the photographs are of the local swimming pool. This image of the town’s pool became the personification of Communist state. The pool is where the young generation gathered at the watering hole to meet and bath in the sun and catch shade from ideological presence of the Red State. This phenomenon was also present during the same era in America. Whatever did happened to our local free YMCA pools? The exhibition reminds me of the striking scene in Raging Bull, (shot also in beautiful black and white) where Robert DeNiro meets Cathy, a 15-year-old girl who entices his eye. DeNiro touches her through the cage fence; she’s in a revealing bathing suit like many of Tichy’s dream girls. LaMotta, like Tichy, is a poetic animal.
The I.C.P has a landmark show on their walls. Tichy’s bad camera never becomes a bad picture. Tichy art is the anti-thesis of photography, he treats the photograph in way that makes professional photographers cringe and there lies his magic. This observation is crucial; here we have a collection of more than a moment but a life. Thank You, Mr. Tichy!
Respectfully Submitted,
Robert Caruso
April 29th, 2010
Posted by Robert Caruso at 8:54 AM