Twilight Visions at the International Center of Photography 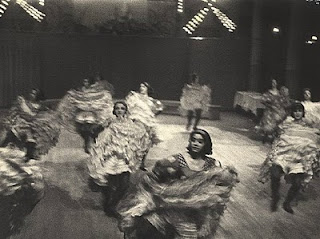 Walking down the stairs of the International Center of Photography, one enters the dim, ethereal exhibition guest curated by Therese Lichtenstein. She has brought together over 150 works, mostly photographs, but also films, books, and period ephemera, to represent the surrealist view of Paris during the 1920s and 30s in Twilight Visions: Surrealism and Photography in Paris.

This exhibition aims to set the mood for viewing black and white Paris as portrayed by Surrealist photographers such as Brassaï, Ilse Bing, Man Ray, and André Kertész. As one walks through the various dark rooms painted in the somber tones of eggplant and deep teal, one encounters variously sized and framed photographs depicting diverse scenes of Paris such as street views, the Eiffel Tower, and Montmartre cancan dancers. The somber, subtly chaotic mood is an attempt to alert the viewer of the “twilight zone” he/she has entered, that place between night and day and according to Lichtenstein, “in which objects and people are strangely illuminated and things are both revealed and concealed.”[i]

The first section, “Marvelous Encounters,” exhibits photographs of sights around Paris meant to capture the everyday as more surreal and magical than it appears. Brassaï’s Staircase in Montmartre (1932) shows an exterior staircase of two flights alongside a wall and a slope paved with bricks and cobblestones. The only living being in the photo is a little dog standing on the landing between flights, all the rest is quiet, gray stone. Capturing the scene at a time when the sun creates dark, angular shadows off walls, this photo is full of contrast and strong, geometric lines, making the scene more dramatic than would be at first glance. Reminding one of a scene out of a François Truffaut film, this photo captures the quiet, eerie stillness of a neighborhood, devoid of human life.

Sounds interrupt this subdued exhibition with films playing throughout. Salvador Dalí and Luis Buñuel’s iconic film Le Chien Andalou (1929) can be seen as one approaches the exhibition from the stairs. Although, as it is positioned to the left toward the end of the exhibition, it is not visually emphasized and thus easy to miss. Jean Renoir and Jean Tedesco’s La Petite marchande d’allumettes (The Little Match Girl) (1928) is more prominently displayed projecting against a wall with a single bench for those willing to spend 33 minutes to watch the entire short firm. This film captures many ideas experimented with during the Surrealist movement through the retelling of a Hans Christian Andersen tale. The story is of a young matchbox seller forced out of her little cabin on a cold, snowy night to sell matches. Unable to sell any, she spends her time watching warm people inside, dodging snowballs from bratty boys, and staring at toys in a display window. The film moves into the surreal as she lies down in the snow, too scared to return home with no money, and begins to freeze. She starts hallucinating and dreams of playing with life-size toys. The film culminates with her being chased by Death on horses in the clouds and him eventually triumphing, in her dream as well as in reality. Utilizing superimposed images and camera effects such as soft focus and an early form of lens flares, this film dabbles in the bizarre and brings a surreal atmosphere to life through the eyes of the little matchbox seller.

A section of the exhibition entitled “Looking at Atget” realizes the influence Eugène Atget had on the Surrealists and compares his photographs with a selection of theirs. One such pair is Atget’s Pont Neuf (1902-03) and Man Ray’s Le Pont Neuf (ca. 1935/37). The photographers chose different portions of the Pont Neuf to photograph, but similar angles are employed, thus showing a likeness in composition. (Relevantly, there is also a small exhibition of other Atget Parisian photos on the same floor.)

In the back of the exhibition is the section “Portraits after Hours.” As the Surrealists moved around Paris, some spent time in the night clubs and bals musette establishments and captured people there in photos. One such image is by Ilse Bing, French Cancan Dancers, Moulin Rouge, Paris (1931) in which the dancers are photographed as blurry shapes as they hold their skirts high and kick their legs. The intensity of the dancing and the lively atmosphere are perceived by the blurry edges of the dancers and the lit up, sparkling windmill blades in the background. The viewer becomes the patron at the Moulin Rouge and a part of the Parisian night life in Montmartre as the dancers face the camera and no other people can be seen.

The final section in the exhibition is called “Mutable Mirrors” presents images distorted in an attempt to alter perceptions, especially of the female body. Partially within this section are six photos of mannequins decorated by some of the Surrealists for the International Surrealist Exhibition at the Galerie des Beaux-Arts in 1938. Photographed by Gaston Paris and Josef Breitenbach, the scantily clad, seemingly haphazardly dressed mannequins were decorated by Man Ray, Sonia Mossé, Espinoza, Marcel Jean, and Max Ernst. Situated on the wall that leads toward the seating for the café they seem out of place, as if not quite appropriate for the theme of the exhibition, more representative of the Surrealist movement than of Paris, but still important as the Surrealist artists decorate and distort these stand-ins for the female body utilizing their own perceptions.

As one wanders through this dark, eerie exhibition, one begins to experience what Paris might have been for the Surrealists in the 1920s and 30s, or rather what they want viewers to see of Paris. A place of intrigue, even in the most basic of sights and monuments, and a place where the imagination can run away and distort reality in an attempt to see it differently. Hopefully after viewing Paris in black and white, the viewer will see Paris as the Surrealists intended, though remembering that this is only one perspective of many.

[i] Quoted from intro panel of Twilight Visions: Surrealism and Photography in Paris (2010).

Posted by Rachel Correll at 9:19 AM