I Don't Want To Get Over You 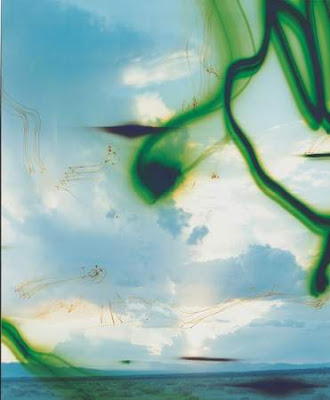 Currently featured in Surface Tension: Photographs from the Collection at the Metropolitan Museum of Art, is a work entitled ‘I Don’t Want to Get Over You’, by Wolfgang Tillmans. The piece is a large-scale chromogenic development print created in 2000. ‘I Don’t Want to Get Over You’ deservingly is the only print in the exhibit to have its own wall-space and immediately catches the viewers’ attention. Surface Tension consists of contemporary artists exploiting the contradiction between photograph as a window and photograph as an object. The exhibition presents works that play with tension between the flatness of photographs and their lifelike illusion of depth. Tillmans, a distinctive German photographer who emerged in the 1990s, creates works of art that play with texture and dimension, and captures vignettes of everyday life. He also uses multimedia and photographic techniques to direct viewers’ attention directly to the physical surface of the photograph. In ‘I Don’t Want to Get Over You’, Tillmans manipulated the photographic paper during the development process to achieve dimension, as well as create a mood to correspond with the theme of his image.

The subject of ‘I Don’t Want to Get Over You’ is a blue sky, clouds, terrain and beacons of light. Dark greenish-black ink streaks the surface and obscures the image. At first glance, the viewer sees a beautiful photo of sky and ocean that is ‘ruined’ by ink, but when one carefully studies the photo, it becomes noticeable that the ocean, is not water at all, but a grassy field backed by misted mountains. The color of the landscape was altered in order to become more harmonious with the primary subject—the vast sky. Also, the ominous streaks that previously tainted the image, now enhance the scene and make it more intriguing and textural. One may question why Tillmans would manipulate the paper and want to change this beautiful, naturalistic scene. Tillmans does this to create a mood, to tell a story and to invent! If the scene was left in its natural state, it would not be original and would fail to ignite the viewers’ imaginations. ‘I Don’t Want to Get Over You’, successfully reels in onlookers and because of its title, creates the jumping-off point for viewers to concoct their own story to go along with the image. I find that photography often falls flat and begs to be considered a legitimate art form through desperate attempts at mimicking painting (especially through digital manipulation), but the works of Surface Tension, especially Tillmans’ piece, are original works of art. ‘I Don’t Want To Get Over You’ is an interactive piece; which is rare in photography, and goes beyond the surface, allowing one to fall into its skies and get lost in thought.

Tillmans’ title is irresistible and was named after a song by the American indie pop band, ‘The Magnetic Fields’. According to the tombstone, Tillmans fashions his best work after the perfect three minute pop record. A majority of pop music consists of simple, cliché lyrics that deliver the message of the song quickly and efficiently. No one wants to listen to a radio pop tune and have to over think the song. The point of the perfect three minute pop song is to ease listeners and provide them with the opportunity to relate to the song based on its familiar subject. It is all a marketing strategy for pop music why lyrics and titles are so straightforward and simple. Though Tillmans may very well like ‘The Magnetic Fields’ track, he understands this marketing strategy and reflects it in his work. Viewers will see the piece and may not understand it, but when they read the title—it is easy enough to comprehend—and so they apply the ‘meaning’ of the title to the art and make it work.

It is possible for the piece to stand alone, without the title, but I do not think it would be as successful or intriguing. The power of the piece owes a lot to the title. The two paired together just works and makes sense. How so? The scene without the manipulation symbolizes beauty, freedom, hope and endless possibilities. It symbolizes the ideal (even if it may appear saccharine). There is a vast blue sky, and blue terrain—blue being a calming color that symbolizes loyalty and clairvoyance; which fits accordingly with the theme of ideal love. The warm beacons of light that emerge from behind the clouds inform the viewer that the possibility of ideal love is actually attainable. This hope is clouded though by the ominous streaks of ink (anguish and heartbreak) that drifts across the surface, obscuring the beauty behind it. This dark ‘smoke’ belongs to the artist not wanting to get over his past love. The smoke still lingers because of his emotional state and fogs the artist from seeing the beauty that could possibly be his, if he just let go. It is often said that we are unaware of the beauty that surrounds us when we hold on to the scars, regrets and negativity in our lives—preventing us from moving forward. The blue of the image could also serve a dual meaning and represent the blue, depressive state of the artist—especially since the landscape was intentionally altered blue—emphasizing his dazed, nostalgic condition. I even took a moment to listen to the ‘Magnetic Fields’ track and the lyrics are harmonious with Tillmans’ piece.

I don't want to get over you. I guess I could take
a sleeping pill and sleep at will and not have to
go through what I go through. I guess I should take
Prozac, right, and just smile all night at somebody new…

to get you off my mind. I could leave this agony behind…

but I don't want to get over you

cause I don't want to get over love…

This is Tillmans’ message. It is romantic and poetic. Tillmans is successful in creating a work of depth. ‘I Don’t Want to Get Over You’ is relatable and memorable—like the perfect three minute pop record—except better! It goes beyond the surface and displays how powerful the underappreciated field of photography can truly be.

Labels: I Dont Want to Get Over You, Wolfgang Tillmans