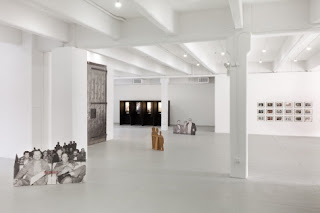 Past Time: Selected Works 1973-1995, the two-decade survey of work by American Conceptual artist Adrian Piper, is currently on view at Elizabeth Dee. In this exhibition, Piper's work shows an incredible breadth of imagery with rarely viewed photo-text installations, sculptures and videos. Featuring some of her most confrontational images, the work seen here is gripping, focusing on her uncompromising political output during those twenty years.

As an African American female artist, working in a predominately white male art field, she looks at black history in the United States for much of her work. Motivated often by current news stories, Piper’s artistic pursuits are often associated with themes of race and racism. During the late 1960s she began combining Minimalist sculpture with deeply rooted political issues—race, gender and identity. Her developments, which were considered nontraditional at the time, gave way to the incorporation of political content in conceptual art. Piper’s influence on younger generations of artists is immeasurable. Contemporary artists, such as Mickalene Thomas, are the inheritors of Piper’s developments particularly the incorporation of gender and race into traditional art forms.

Piper uses permutation and seriation to investigate the themes of her work. By looking into the configurative possibilities of her images the variety of potential perceptions derived from her imagery can be better understood. This method of working, which also was nontraditional at the time, most likely came from her study of philosophy; Piper is also an analytic philosopher. The combination of art and philosophy, seen in her later work, resulted in a reconsideration of the defining limits of individuals often already established by uncontrollable variables like race and sex.

One of the earliest pieces in the exhibition, Mythic Being, 1973, shows Piper walking through Cambridge, Masssachusetts and New York City repeating a passage from her journal while wearing an Afro wig and a mustache. She takes on the identity of a black male and discards her identity as a young woman.

This is Not the Documentation of a Performance, 1976, is a newspaper article about the protest over a pending eviction of thirty Hispanic families in New York City with the headline, “Squatters Fight Eviction by Church.” Piper rephotographed the newspaper’s image with text applied to one of the demonstrator’s signs reading, “THIS IS NOT A PERFORMANCE.” A local church was trying to force the tenants out of their homes on the Upper West Side of Manhattan. Their intention was to tear down the existing tenements and build new high rise apartments for the elderly. The low-income residents who were picketing attended a church service there later that day. The minister, during his sermon, told the parishioners that the church was not to blame for the matter. He concluded the service with a prayer for the poor.

In the video, It’s Just Art, 1980, a dialogue is created between Piper and the viewer. Thought bubbles, superimposed by the artist, are paired with images from Vietnam's invasion of Cambodia, taken from the news. One of the texts reads, “But they establish a physical intimacy between us nevertheless (hesitantly you agree wondering what this commits you to),” leaving an unsettling feeling for the viewer. This performance documentation includes fifteen black and white images with hand-lettered text and three paper collages. A video runs next to the images with circulating photos of Southeast Asian refugees. A track of Piper reading aloud a critical essay from The New York Review of Books along with Rufus and Chaka Khan singing “Do You Love What You Feel” plays with a less than serious chorus of “Do you love what you feel, Cause I love what you do to me.”

Vote/Emote, 1990, is made up of four voting cubicles with silk-screened light boxes behind window panes. Within each cubicle there is a notebook, a pen and preprinted paper on a wooden shelf. The light boxes each show a different photograph of Civil Rights protesters. Once inside the cubicle, Piper instructs the viewer to follow instructions like listing their fears. Here, the space generally reserved for democratic purposes is essentially turned into a confessional. Forgotten or eased anxieties become present and apparent again for the viewer.

The autobiographical Ashes to Ashes, 1995, stands apart from the rest of the exhibition as it is incredibly personal to Piper, telling the story of the death of her parents. Four panels—three of photographs and one of text—comprise the work. The images of her mother and father are presented with their story, which begins, “Theirs was a marriage of passion rather than convenience.” The memoir-like work adds another dimension to the politically driven exhibition.

Additionally, throughout the gallery there are large cutouts of images from the Civil Rights movement and suit and tie businessmen. Across the cutouts is the word “Forget” in a red font. The word becomes both a command and a criticism for the viewer.

Within this show it becomes clear that definite changes occurred for Piper over the twenty-plus year span covered by this exhibition. Using Minimalism in her own way, the artist moves her focus from using herself in her work, as seen with Mythic Being, to others, This is Not the Documentation of a Performance. Her later work is primarily photo-text installations which seem to implicate the viewer in the historical and cultural themes explored. Overall, Past Time: Selected Works 1973-1995 is incredibly uncompromising in its political and personal messages. The viewer is left unsettled and speculative, thinking about the social and historical injustices poignantly brought to attention by Adrian Piper.