Between Here and There: Passages in Contemporary Photography 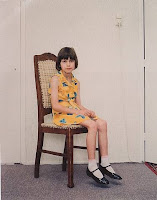 One of photography's inherent and historical objectives has been to capture a slice of time and give it to us as proof of some sort of true, tangible existence. But how fixed is that existence, and can the photographs we've used as evidence of physical actuality work as a contradiction to this singular reality? This is not a new idea, but it's an idea explored in the show "Between Here and There: Passages in Contemporary Photography" at the Metropolitan Museum of Art. The show attempts to convey the themes of dislocation and displacement in photography after the 1960s and brings together artists whose work demonstrates objects and people transcending singular moments of time and space and suggests a more complex idea of how things move in the world.

Black and white photographs from the 60s and 70s compose the majority of the first half of the show: a conversation via satellite television with President John F. Kennedy sitting in an armchair staring at the head of Ronald Reagan in a television screen, an eerie crop circle from Ireland and a 25-foot panorama of rolling negative-sized pictures detailing every building on the Sunset Strip are a few of the pieces.

In the center of the entrance space is On Kawara's 'I Got Up' (1970.) The work is a collection of 47 postcards stamped with the date, time and location from where Kawara "got up" that day. The pictures on the postcards are an assortment of images of Manhattan and are sent from various addresses and stamped with different times, so what seems like unvaried content on the surface is actually very manifold. The process however does seem obsessive, as if the artist is desperate to prove, to his friend, to himself, and to us, his existence in space. Kawara communicates he's alive and transcending geographic locations. A lot of Kawara's work has this existentialist theme of needing to impart the reality of his being; every post he's made on Twitter notes: "I AM STILL ALIVE #art." The machine-like routine it took to create this work, which in totality spans eleven years, gives way to a reflection about time and our shifts among it.

A large photograph of a mosquito trapped under a glass piercing pinkish flesh catches the eye with its seemingly unfitting abnormality among the other pieces. White text on a black background reads, "The mosquito is filling its body with material lying below the surface on which it stands. It then becomes airborne, thus creating a material displacement. The blood now conforms to the interior configuration of an insect, thereby placing part of you in a state of aerial displacement." This work, 'Material Interchange for Joe Stranard' (1970) by Dennis Oppenheim, allows you to imagine your blood, your DNA, floating above your physical body in the belly of a mosquito. Part of you has merged with the insides of an insect that's buzzed off to explore other parts of the world; part of you has been displaced. There is this thought that not only do we occupy the physical space we're in, but bits and pieces of us are left behind, are taken away, and move throughout the world without us even realizing.

The second half of the show displays work from more recent artists, those from the 80s and forward. An instant black and white photo by Felix Gonzalez-Torres shows a pure white sky, a body of water and the suggestion of mountains obscured by a chain-link fence and strings of barbed wire, implying a bodily inability to reach a desired area. Toward the back of the room, a large photograph by Doug Aitken taken from the window of an airplane, shows us a grape-blue sky topped with an orange band of sunrise pushing the dusk away. The bottom of the photo depicts the airplane's engine and far off in the distance, a tiny airplane suspended amid the misty expanse of sky. The photo invites a sort of self-reflection in identifying with the diminutive size of the opposite aircraft knowing you look the same from the other end.

Fitting very nicely amid the show's concepts of movement and inquiries into physical possibilities are Rineke Dijkstra's six large portraits of a Bosnian refugee named Almerisa. The works show the progression of a detached little girl's transition to adolescence over eight years. The succession of portraits begins with 6-year-old Almerisa in an oversized plaid uniform, a floppy bow under her neck and clashing turquoise socks. She sits on a red plastic chair with bowed shoes dangling above the floor and her hands quietly placed on her knees. There's a sincere indifference to her stare, which pervades among the photos. Two years later, in the next photo, she's on an upholstered dinner chair wearing a yellow summer dress. This time she attempts a smile, but there's fatigue yielded from her attempt and her indifference transcends. The portraits impart minute details of expression and emotion undergoing slight alterations over time. All photos have a sparse background showing an electrical outlet or the corner of a rug, but overall, Almerisa and her disposition dominate the composition. After the third photo when Almerisa enters adolescence, her nails bare traces of silver polish and her lips sparkle, but the innocent animation prevalent in most youth is still absent. The sequence of photos document a definite change in the physicality of this young girl, but the nature of her temperament seems to sway from a more rooted domain.

For such stimulating ideas concerning movement, geography, spatial inquiries and somewhat fantastical conceptions about time and transcendence of space, 'Between Here and There' proves an unimaginative label for the pool of work. Not only has the method of showing photos moved beyond the traditional single photograph hung on a museum wall, but has also moved beyond its role of conveying a strict reality. This exhibit shows how contemporary photography has evolved into a multitude of forms and entered the realm of conceptualism.