The implementation of the mechanical photographic process in the mid-nineteenth century granted humanity its first true opportunity for self-documentation. The advent of this technology, and all of its subsequent and continual advances and innovations, has markedly altered the way in which people perceive information. Walter Benjamin, in his 1935 essay, “The Work of Art in the Age of Its Technological Reproducibility,” first postulated this alteration in his argument that technological advances drastically affect sensory perceptions. He purported that when humanity is represented by means of a technical object, the mechanistic method of portrayal or reproduction can contribute to underlying motifs of self-alienation. The realm of the digital age and the onset of widespread availability of the Internet have increased the use of the artistic technique of reproduction through appropriation, which in turn contributes to the collaborative and vague authorship that convolutes the sense of self. The pieces in Free, on view at the New Museum, investigate this amplified use of the virtual domain as public space in which themes of technological documentation and themes of estrangement frequently converge. 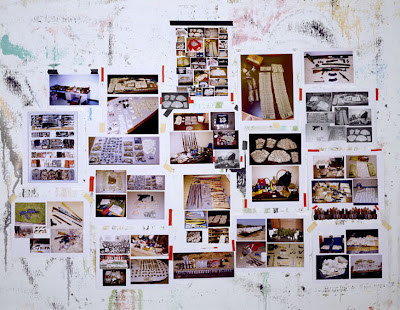 In Seizure (2006), Los Angeles-based artist Amanda Ross-Ho organizes photographs borrowed from a police website of paraphernalia confiscated during drug-related arrests. The resulting clumps of like items resemble line-ups of mass-produced goods displayed for consumer purchase. The assembled materials are presented in structured categories strikingly reminiscent of aisles of products within a department store. Ross-Ho adopts these visual records to acknowledge the reproducibility both in commodity culture and in the ease of forthright appropriation of others’ images from the countless arrays available via the Internet. Even the display table’s surface is a replica of the original: Ross-Ho photographed the surface of her studio table and placed it atop an actual table, heightening the sense of duplicity through appropriation. This easy mimicry distances the photographed objects from the viewer, creating a conflictingly remote and innocuous spread of harmful tools upon a slapdash evidence table.

The estrangement manifested in Ross-Ho’s appropriated weapons and illegal substances invokes Eugène Atget’s early twentieth century documentation of Parisian streets. Atget’s incredibly extensive representations of Paris storefronts and alleyways produced an oeuvre of copious photographs that almost reversely establish the city as an aloof, intangible place. Likewise, Ross-Ho’s catalogue of confiscated items, though arranged in a straightforward and unapologetic manner, manages to distance itself through its accumulated layering of technological replications. 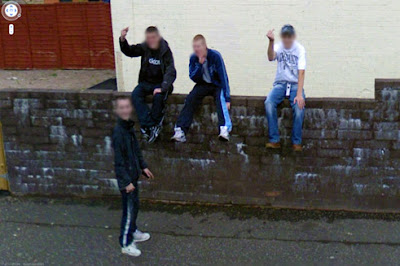 Google, in a similar vein to the documentation of Atget, has initiated an immense project to produce an interactive map of the world that is navigable online. In 9 Eyes of Google Street View (2010 series), Canadian artist Jon Rafman acts as modern-day flâneur, perambulating Google’s virtual flip-book of computerized street shots in search of the rare and unintended presence of people. Google’s accidental evidences of humanity are countered with intentionally blurred visages, an ironic attempt on behalf of the corporation to protect privacy while the company simultaneously strives to make the map of the world publicly available.

As Benjamin postulated, technological accessibility and reproduction drastically change our sensory perceptions of experiencing location. Google’s corporate documentary efforts to chronicle all of humanity’s lived-spaces in order to house the two-dimensional replications within the vast network of the world wide web yield images that have the appearance of a wasteland: fugitive, fleeting photos that are accentuated by the hauntingly indistinguishable faces of the people within them. Both Atget’s and Google’s treatment of documentary subject matter is suggestive of crime scenes to be preserved through technological representation, where, in their like-minded endeavors to capture renderings of the city, their mutual lack of figural imagery somewhat alienates humanity due to its distinct absence from the recorded image.

Harking back to Benjamin’s ideas regarding mechanistic methods of portrayal, the age of technological reproduction can make actors out of the masses: individuals, in recognizing the potential to be viewed by the gads of people that comprise the Internet population, might distort or disguise themselves in this exaggerated self-awareness. With the Internet becoming a vastly expanding locale for self-exhibition, these productions of self can be multifarious and shifting, resulting in numerous replications of varying correspondence to the original. 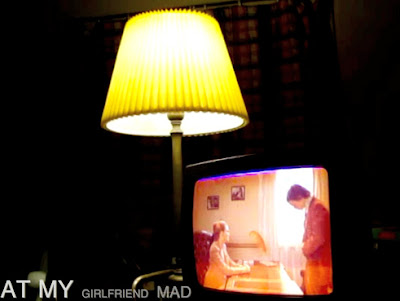 The constant self-awareness that plays into the technologically perpetuated act of self-exhibition is epitomized in Ryan Trecartin’s and David Karps’ real-time work, riverthe.net (2010). This new media piece allows users to upload ten-second videos with three attributed tags of key words or phrases that reflect the video’s content. Videos with similar tag words are then connected, yielding a never-ending film of merged random clips that reads as a hurried stream of collaborative consciousness via motion-picture. The folksonomic tagging, in which the contributor can include terms of his or her choosing, creates a bizarre chain of linked clips that contain both banal domesticities and alarmingly personal revelations. Phrases like “boys pretty pretty pink” and “at my girlfriend mad” encourage users to reflect on these digital reproductions of themselves, which strengthens the marketing enterprise of the individual identity as a product to be consumed.

The advent of digital technology has initiated a societal progression into a heightened performative, exhibitionist sensibility. Benjamin’s notion of the “overwhelming, indeed annihilating, effect of new apparatuses upon the human body and its senses” is evidenced in computer technology’s gradually increasing allowance for humanity’s aloofness in regard to its own privacy. The pieces in Free accentuate the distance that is amassed through this technological and unhindered self-propulsion and its easily-produced replications. The “productive use of the human being’s self-alienation” has evolved into a culture in which people have no qualms in ubiquitous self-display via the world wide web, which has become a veritable repository for the records of an increasingly uninhibited humanity.

Does the enhanced social connectedness brought about by the Internet induce a lack of sincerity stemming from an alienated sense of self? Does documenting and appropriating the minutiae of everyday existence disconnect society from its humanity? The works in Free, building upon the relatively young history of technology’s integration with the visual arts, lead the contemporary viewer into the interminable navigation through the tunnels and mazes of online information to ponder these very relevant questions.

Posted by Sarah Mackenzie Wade at 8:34 AM