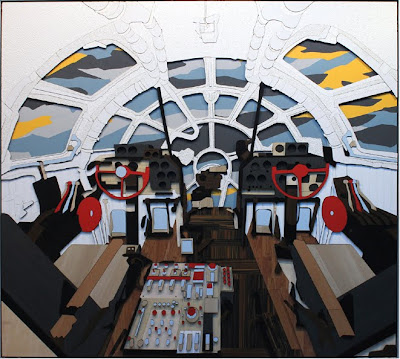 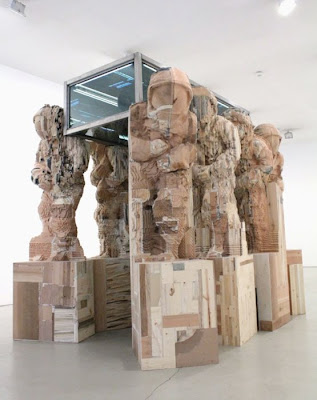 Brooklyn-based Matthew Day Jackson brings together a versatile group of works in this one-man show. The pieces present a study in of seemingly oppositional influences. Fond of directly referencing well-known artworks of the past, Jackson also recycles much of the imagery and shapes of his own earlier work. More traditional materials such as digital photography, video, steel and wood are combined with repurposed bits of furniture and the shell of a vintage car. Pieces composed of primary or candy colors are juxtaposed with pieces rooted in rich shades of gray, ebony and amber. This palette, in addition to his choice of materials, references traditional Americana as well as anthropological and scientific inquiry.

One long wall of the gallery hosts a large set of steel shelves filled with an array of different objects, including bones, antique pottery, illuminated x-rays and a neon sign. Rather than a jumbled antique-shop arrangement, the disparate items in Study Collection VI are meticulously placed. Each object is given space to breath, like a museum-style exhibit of historical or scientific items. The choice of objects, however, as well as their placement on shelves, is evocative of a personal collection in someone’s home. Along the tops shelves are skulls, plaster head casts, and the phrase, “The true artist helps the world by revealing mystic truths,” in neon. The row below this contains molds of human organs, a chest x-ray, and ceramic vessels. The remaining shelves repeat this pattern of objects that reference segments of the human body, which transitions from head to chest to abdomen to legs. At each level, an unpredictable set of objects is cleverly positioned so the overall “body” structure is not immediately apparent, but slowly emerges.

One of Jackson’s strengths is his ability to be simultaneously subtle and direct, spare yet fully realized. For example, in the work just discussed, the neon sign element is a slightly altered replica of Bruce Nauman’s 1967 piece. By incorporating it as a minor element in a larger piece, Jackson subtly incorporates an early example of an artist using a non-art medium, which echoes his own use of unconventional materials. Though his objects are clean and somewhat simple, they are substantial and fully occupy their assigned space. This is exemplified by the narrow piece of steel beam on the row of shelves representing the femur, the strongest bone in the human body. By far the object with the least complicated shape, it harmoniously lines up with the objects above and below it, yet asserts itself through meaning. The most modern of materials does not surpass the strength of the most ancient (what appears to be a dinosaur bone is also positioned on this shelf).

An initially playful-looking piece, the construction of Enola Gay belies its true nature. Constructed from scraps of IKEA furniture and ceiling tiles, this oversize piece has the coloration, shape and texture of a child’s foam puzzle. Simple interlocking shapes, some of which pop out, are layered over a yellow and blue sky. The veins supporting the cockpit roof take on the appearance of cartoon dinosaur bones, while the bright red levers and steering columns look like an arcade driving game. In a way, the use of IKEA furniture is representative of pleasure. The brand has posited furniture buying—formerly an expensive chore—as exciting and accessible.

The paradox of the piece is that the “Enola Gay” is the WWII plane that dropped the atomic bomb on Hiroshima. The audience placed inside the cockpit, looking out through the front windows. By placing the viewer inside the plane, Jackson creates a disconcerting reality. In the same way the war paraphernalia is often fascinating to children, the viewer is initially delighted by what appears to be a giant toy, but is in fact symbolic of the “loss of innocence” often associated with this first use of nuclear weapons.

A single piece, The Tomb, is installed in BlumArt’s smaller SoHo space. In the center of the gallery, eight massive astronauts mounted atop blocks of wood greet the viewer. The astronauts, with their oversized faceless helmets, resemble green army toys, lending and element of whimsy. Atop their shoulders, however, is a glass coffin containing a body (based on the artist’s own). While this is sobering, the scale of the piece is such that viewers can walk between the figures and under the coffin. Upon entering that space and looking up, one sees that the bottom of the coffin is a mirror. The viewer not only sees themselves, but is also able to see into the coffin. This simultaneously brings to mind funhouse mirrors and traveling “freak” shows where the contents of mysterious cages are visible but partially obscured.

Artwork that invites the viewer to interact in this manner is an invigorating departure from the usual mandate to look from a distance. The material also invites closer inspection. The compressed wood and plastic of the astronauts resembles rock veined with quartz. This incorporation of engaging elements rewards the viewer even if they miss the piece’s direct reference to the Tomb of Philippe Pot, a 15th century French sculpture of monks shouldering the burden of their ruler’s coffin. There is a direct contrast between this old, esteemed work and the new piece’s use of modern materials and figures.

Jackson skirts the boundary between scholarly artistic, historical, or scientific references and accessibility by including elements that encourage viewer engagement. Often, when contemporary art combines disparate elements and references, the result is beyond immediate comprehension. A human skeleton encased in Lucite is abstracted only to the point where curving bone edges are flattened into geometric angles, so the subject remains decipherable, but still gives the viewer a satisfying sense that they have discovered something hidden. Jackson’s work rewards the viewer immediately while also containing layers of more obscure meaning. This balance is rare and difficult to realize without coming across as kitschy or insincere to the more experienced viewer. Jackson achieves an elusive level of deep and significant meaning while avoiding audience alienation.
Posted by Sara Campot at 11:22 AM