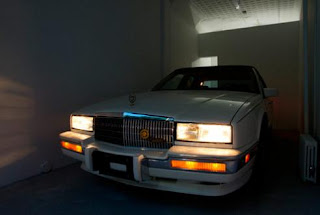 
The Lower East Side’s Callicoon Fine Arts Gallery is host to artist Glen Fogel’s second New York solo exhibition this year. Sentimentally titled Goldye, after Fogel’s late grandmother, Goldye is an installation consisting of a white 1991 Cadillac Seville, an mp3 player, two audio speakers, a mosfet transistor, an arduino circuit board, and a framed certificate of sale, made out to the artist’s grandmother— who was the original owner of the car— hung in the rear right corner of the room.


The Cadillac Seville fills the tiny Callicoon gallery, confronting the viewer head on as they enter, taking them by surprise since the space’s large front windows are reflective two way glass, only allowing the viewer to see through it from within the gallery. The inability to see inside suggests the feeling of privacy, which once inside, gives way to full on intimacy as the viewer inches around the vehicle. The size of the object versus the size of the space promotes the idea that the car is not so much a piece of art in a gallery, but that the space is a mere container for the automobile, nothing more than, say, a car garage.

The Seville's imposing presence is emphasized by the sudden but regular flashing of its headlights as it emits a guttural sound that we begin to recognize as the word “Shit”, drawn out over several seconds. What is heard is a recording of the artist’s voice as he recites the word slowly, dryly, and somewhat painfully. This verbal and visual “response” from the Cadillac, actually a looped recording, feels like a human reaction to the claustrophobic confines of the space combined with the inevitable physical contact made with visitors.


Goldye is an intriguing unification of the mechanical aspect of an automobile and the emotive quality of the visual and aural stimulus. More than that, though, Goldye feels like a monument. Fogel’s late grandmother, for whom the show is named, suffered a near-death experience approximately one year before her recent passing, and Goldye comprises a reenactment of this near-death event. In that regard, the lights can be explained as relating to the mythicized lights one reportedly sees upon their death, and the verbal repetition as Goldye’s response to her near fatal condition.

Callicoon Gallery is the perfect space for Fogel's Goldye because without the tight, somewhat uncomfortable forced intimacy with the work, we might not fully grasp the familial nuances inherent in the piece-- that presence of dark, comical sentimentality embedded in this and other works by the artist.