Ry Rocklen Believe You Me 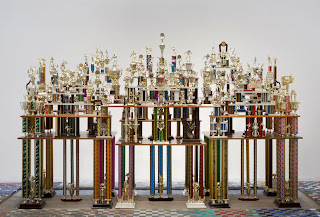 
At UNTITLED gallery this month, Ry Rocklen’s debut exhibition titled Believe You Me is on display. Rocklen has had an extensive art career based in the use of found objects and this show is no exception. Each work calls to it’s thrift store companions that you have seen a thousand times, but now seem to rise above into a new poetry. This show in particular, has the extremely specific and sensitive undertone of being in line with the ten year anniversary of the September 11th terrorist attacks. However, Rocklen has shifted the focus away from the iconic imagery from that day and given light to the expansion of the American flag into our everyday lives.

This eye catching show draws the viewer into the gallery immediately from the street. A monumental American flag displayed solemnly in the font window spanning the complete length of its pole, gently touching the floor. Extremely simple in material, this work acts as a nod of respect to those who were lost that day and allows the viewer to enter a post 9/11 world of imagery and symbols.
Upon entering the gallery you are lead towards the back of the space where a bedazzled collection of work forms a shine-like arrangement. A sign and wooden bench invites you to remove your shoes and move around the psychedelic checkerboard of concrete tiles and liberated thrift store paintings. While enjoying the chill of the concrete upon your feet you encounter four smaller works, a chrome telephone book, a towel entombed in mosaic tiles, an earring embellished umbrella stand and a plaster female head resting upon American flag pillow. Then the breath taking structure of the work titled Second to None. Hundreds of once prized trophies have now been reconfigured into a great shrine which dazzles the eye.
After the first wave of visual euphoria washed over me and I began questioning the intentions of the works, I became quite frustrated. Without the undertone of 9/11(which is very easy for the viewer to miss), Rocklen’s work seems to be made by a formula for contemporary art with the end product being that of spectacle rather than meaning. Although with further investigation these objects joined together by their previous lives, together now speak of the realization of dedication and the cost of our lives, that we as American’s enjoy everyday in a post 9/11 world.