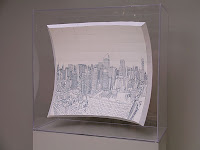 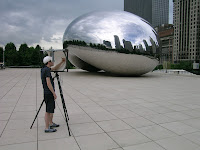 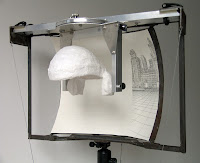 New York based artist’s, Ryan and Trevor Oakes, recently exhibited a series of drawings that grapple with an issue continually revisited by artists. Breaking artistic process down to the physical and technical level, the twins produce mechanically assisted drawings that capture an accurate spatial perspective as it appears to the human eye. Also exhibited in the space was their vehicle of production, “a customized, curved easel and attached, rotatable head rest,” as quoted from the exhibition’s press release. By using this tool, the artists could harness a split-image vision that allowed them to render the most complicated cityscapes on curved canvases that mimic the shape of the eye. The Concave Easel, as it is titled in the CUE Foundation, ultimately meshes the arts and sciences into a set of undeniably remarkable perspectival drawings. Before undermining the legitimacy of the mechanically produced cityscapes, it is important to note that even Van Gogh was known to rely on an innovative perspectival frame.

The exhibition space itself, located at 511 West 25th Street, failed to justly present the twin’s inventive exploration of perspective. Communication between viewer and artistic intent was practically nonexistent, as it was evident that several gallery-goers were unimpressed or did not take the exhibition seriously. Had there been a more effective dialogue between the audience and the body of work, perhaps highlighting the innovation of a timeless artistic convention in terms of physics and human spatial perspective, the exhibition would stand as strong as the body of work that is housed within. "The Oakes Twins" is on view through October 29th.