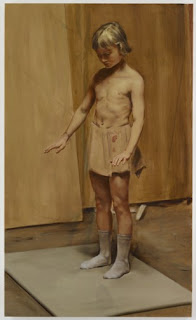 Michaël Borremans’s solo show in David Zwirner Gallery presents his most recent paintings, a collection of works that encourage us to believe again in the power of painting to express beauty. In the Devil’s Dress, as the exhibition is called, Borremans immerses the human figure on theatrical surroundings that evokes nostalgia and isolation. The appealing way of approaching the painterly gesture and oil paint’s physicality creates a visual scenario where to enjoy the painting.

These paintings are imbued with a painterly sense inherited from the Old Masters. The balanced use of color, atmospheric use of shadows and a thoroughgoing analysis of human morphology and clothing contain an obvious resemblance to Velazquez’s paintings. However, Borremans explores atypical compositions - with vanishing lines that ends out of the canvas-, that led into lonely spaces where he places human figures.

The attitudes the characters suggest are mostly ambiguous: we do not really know what they are doing or if what is happening is actually possible. In The Hovering Wood a woman lays on the floor while covered by a hovering piece of wood, or in The Loan, where the woman depicted has no head-. These impossibilities contrast with the realism through which the painting is accomplished, creating an effect of mystery and illusion. In other words, when we embrace a naturalistic painting we expect to find nature as it is presented in reality. For this reason, in a realistic painting the surprise of seeing an unreal element is stronger than in any other style of painting.

The Knives presents a young girl hiding her look by nodding her head. The fact that she is concealing her sight from us is not a random fact. Indeed, all the characters displayed in this series of paintings are hiding their faces from the viewer, as they were afraid to reveal their identities. However, instead exposing their gaze some of them show their nude bodies, as it were an excuse for covering their eyes. The result is an awkward confrontation between us and the image; we cannot get a clear idea about the character’s feelings. What does Borremans questions by hiding the character's look? Is he using it as a formal resource or does it has metaphorical connotations? What is obvious is that its consequences are strikingly disturbing.

Some undefined particles appear floating over the girl’s breast, and their blurred shallows are casted on her vest creating a sense of space and illusion. This manner of creating foregrounds over the layer where the main action is developed is a recurrent characteristic in Borremans’s painting. In fact, he achieves this effect through a few small highly luminous brush stokes that overlays from the entire picture. For example, in the Devil’s Dress we can see how the unique white paint drop there is in the middle of the red element creates an effect of deepness in relation with the layer where the character is placed. Other times the artist uses these ultra luminous touches to provide the figures with a wet-effect, as the Touch illustrates, while at the same time brings them a sense of unreality, because the shiny reflections cannot be cast on skin but only on a porcelain object. The human figure adopts extraneous features, and that is awkward.

Furthermore, the character’s bodies are displayed in very strange and unconventional positions, a fact that helps creating these perturbing scenarios. In the Wooden Skirt a girl’s gesture is ambiguous. She is contemplating her semi lifted arms–what is she doing with them?-, and her outfit is awkward; a semi nude body just with a skirt of the same color range of the skin, without shoes and stepping on a square carpet. Seems like she is meditating in silence, or feeling how her own arms float in the space. A self-reflexive attitude is present here as well as in all the other paintings; the girl is isolated and looks at herself as her body were her only company. There is no communication with us, she is only looking at herself. This make the entire image being closed in itself, mostly because its central composition; its lecture does not go beyond its interior trajectory, it is not directed to our gaze but remains within the composition.

Borremans achieved an outstanding creation of the atmosphere in this piece in particular. It feels like we can almost breathe the air that involves the whole scene; an air that smells like sack-cloth and cardboard.

The Loan may be the most shocking painting of this exhibition. First of all because its large scale absorbs us into its majestic presence. Secondly, because what it conveys: a woman which look is, once again, hidden by turning her back on us. Moreover, in this piece the sense of awkwardness goes further since she has no head but her neck finishes in a metallic lid, like she was a mannequin. The delicacy accomplished in the different textures of the skirt, shoes, and skin contrasts dramatically with the grotesque absence of the head. Once again a human character acquires features of an object -of a mannequin. However, Borremans approach this game of illusions with extreme subtleness; it takes some time to realize there is something “wrong” in the image, so the importance of the whole canvas is just not addressed to this fact –otherwise other values of the painting would be lost.