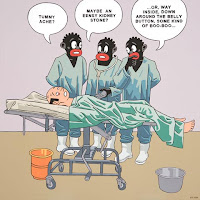 Anton Kannemeyer: “After the Barbarians” at Jack Shainman Gallery

Strangely enough, it seems it is the combination of sameness and irony that makes Anton Kannemeyer’s work so powerful. Walking into the gallery, Kannemeyer’s framed sketchbook pages and smaller paintings depicting the respective preferred sports of black and white South Africans ease the viewer into the work, for the first and last experience of subtlety in the show.

Like many South African artists, Kannemeyer’s work primarily focuses on social and political issues in the country as well as issues of identity and race. Kannemeyer is aware that he is not the only artist working in this manner, and for that reason he exploits it. Rather than commenting on racism or stereotypes, he displays, magnifies, and satirizes them. He showcases examples of blatant prejudice and ignorance that force the audience to think not only about the subjects of the work, but also about their own reaction.

A cartoonist, and co-creator of comic book series “Bitterkomix,” Kannemeyer’s figures are overly exaggerated and often are inspired by the controversial Tin Tin in the Congo by Herge. “Very, Very Good,” a large painting in his signiture comic panel style portrays Kannemeyer himself (a white man) peering over an Herge-esque black man in a suit before a canvas. The painter appears to be considering the painting while the Kannemeyer character smiles and states via speech bubble,” Oh, no! I’m not just saying it because you’re black. I think it’s really very, very good.” The black man's painting is facing away from the viewer, so we have no way of knowing whether it is good or whether Kannemeyer thinks it is good.

The bright colors and graphic nature of the blown up comic strips are an obvious attempt to bring irony to the dark and discriminatory messages they carry. However, as obvious as this may be, it showcases how satirical they are meant to be and often perplexes the viewer. Kannemeyer challenges his audience, the paintings acting almost as a mirror to the emotions that are released when viewing them, whether they laugh, cry, or feel nothing. If one sees a colorful image with a shameless racist or stereotypical caption and they react in a way that surprises them, what does that say about a person to others and to themselves? It is this forced self-reflection that is often provoked that makes Kannemeyer’s work separate from the other South African artists who simply show how they feel with no consideration to their audience, no matter who that may be. One work illustrates this point perfectly, as it includes no text at all. “Black Gynaecologist” shows a blonde white woman receiving an exam from a black doctor. The viewer’s reaction, or lack thereof, becomes the real focus in this show.

Many of the paintings in the exhibition portray Kannemeyer himself. By using his own image, yet another important characteristic (stereotype, if you will) of South African art is put to use. The subject of identity and race are often themes in art, but many white South Africans post-apartheid have begun to express their own identity crises. He often portrays himself and other white persons as authority figures who seem conflicted as to how to act or speak. Yet another question is posed to the audience: who really is in authority? Is being an authority figure always proportional to having the power in a situation? As with “Very, Very Good,” another image included in a display of a “Bitterkomix” issue portrays Kannemeyer as a boss interviewing a black woman. “A Black Woman,” shows the boss figure staring at a resume with a thought bubble that reads, “I see by your resume that you’re a black woman.” This combination of dryness and absurdity is the core of Kannemeyer’s work and what makes it so compelling. It says one thing but implies another, and is as complex in meaning as it is simple in aesthetics.

Not every work in the exhibition is so dark or controversial. Two portraits at the back of the gallery portray Ninja and Yo-Landi Vi$$er from Cape Town music act Die Antwoord. There are no captions besides the performers’ names and the portraits appear simply to be a toughened up comic book style portrait. The sketchbook pages at the beginning of the exhibit are equally tame, despite the occasional humorously collected news clipping.

Although much of the work must be thought of conceptually to be truly understood, the paintings themselves are quite remarkable. The quality of the work itself from these pages to the paintings is so neat and precise that the words in the speech bubbles become even more menacing. The more menacing they appear, Kannemeyer hopes, that once juxtaposed against the pastels of his comic pages, his audience will truly begin to think.
Posted by sue at 9:58 PM