All: Cattelan at the Guggenheim 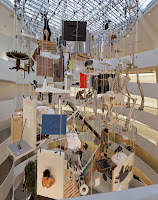 All: Cattelan at the Guggenheim

Hailed prankster and provocateur of the contemporary art world, Maurizio Cattelan recently exhibited his first retrospective at the Solomon R. Guggenheim Museum. On view through January 22nd, All is composed of 130 pieces in total, all the works the artist has created since the beginning of his career—from 1989 until the present—and with this retrospective marks Cattelan’s retirement from artmaking.

The Italian artist has taken all his work, mainly sculpture and installation and suspended it from the rotunda of the Guggenheim Museum, producing one collective behemoth that stands as an end unto itself. Viewers are able to explore the intertwined retrospective from all perspectives, starting at the bottom and gazing up from below as well as circling up the spiraling ramp from the ground to top floors to see the works from all sides, angles, and elevations. Much of Cattelan’s work deals with frustration, animals, politics, critiques of art itself, and even representations of the artist himself. There is a miniature functioning elevator, a little boy who drums out a beat atop of a horse drawn cart, and taxidermied pigeons littered throughout the tangled retrospective that claim, much like any given street in New York, the work and its means of suspension.

At the top floor, visitors can see the circular metal platform that holds up the dense mass of works, and most of the ropes (whether needed for actual suspension or for an additional aesthetic rawness) hold up only one piece each. The ropes, however, drop off at varying heights throughout the rotunda’s six stories from ceiling to lobby.

For the exhibition it is beneficial to pick up a pamphlet, or perhaps familiarize yourself with Cattelan’s pieces individually. In this retrospective, many pieces lose their message because of their original context. Further, many pieces which normally stand on their own, are intentionally or unintentionally juxtaposed next to others, creating a new dialogue and meaning between the work altogether. The separation of viewer and artwork are disadvantageous as well. For example, Cattelan’s 2007 marble sculptured body bags (also titled All) lose crucial elements to understand the work. When presented in the museum setting, viewers are invited to circle around the pieces as they lay on the floor, and can fully conceive of the solid marble “deceased.” Suspended and seen from a distance, the works loose their solidity and overall impact.

Likewise, many of Cattelan’s installations depend on the gallery or museum setting as a crucial element to the piece itself. Works of this nature, such as his 2007 piece, Untitled, which is simply yet another texidermied horse installed into a museum wall from the neck down (with the illusion that the animal permeates the gallery’s wall) are presented with “stand in” museum elements. In this instance, such as Untitled, the horse (which is normally attached to a solid wall) has only a piece of white sheetrock of severely less proportions where the wall meets the neck. Which has more of an impact: a full sized horse attached a good height up to brick wall in an art institution, or a horse with a plain square piece of material attached at the neck of the animal? For the pieces contingent on the art museum, perhaps he should have left these in the galleries of the Guggenheim that line the spiraling ramp to the top floor. These galleries, I believe, were intentionally left bare producing a dizzying journey as you descend down to the lobby.

Despite changes stemming from juxtaposition of the works (or the actual installation) Cattelan was involved with the retrospective and it shows. The presentation of the retrospective warrants it as a single multifaceted piece. Perhaps the changes were intentional, as Cattelan is known for flipping the politics of the art world on its head. Like translating a book, one can go word for word or simple rewrite the book around the same plot. Cattalan went with the later, rewriting the context and meanings of his own art works. As a notorious prankster, who in 1989 infamously hung a sign for his first solo exhibition that read “be back later,“ should have pushed the recontextualizing of his work and exhibition space further. The means of installation forces the viewer to continuously look inward instead of around the rotunda. The work is loud and deserves attention, but relies on its form as a mammoth mobile so that we continuously watch as an infant does in its crib.

One piece in particular that I was let down by were the taxidermied pigeons. In the recent 2011 Venice Biennale, Cattelan littered the outside and interior of the main pavilion with these animals, found on every inch of the façade, its pipes, and supports, which left a strong impression on my experience at the Biennale. If Cattelan went with this, perhaps the experience of his retrospective would have had a similar impact as the animals dauntingly surround his viewers from every corner of the museum space.

Overall, Maurzio Cattelan succeeded in the respect of staging an exhibition that breaks the expected conventions of a retrospective, such as works arranged chronologically. The works are treated not as a collection of objects in linear time, but as a collective work which complements, degrades, and speaks with its internal parts. Despite this, the retrospective does introduce some issues. But as his departure from the art world and given his reputation as prankster and provocateur, perhaps Cattelan simply does not care.