Maurizio Cattelan: An Artist, A Joker, An Executioner? 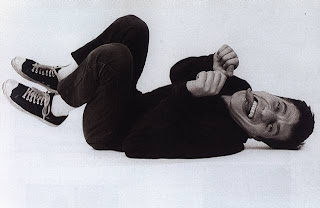 Come one, come all! Watch as the respected Italian artist and trickster of the art world, Maurizio Cattelan, dangles more than 100 pieces of his own work from the Guggenheim’s ceiling! Can he pull it off? Will the artwork survive? Will he fail???

The spectacle of Maurizio Cattelan’s retrospective, All, is certainly one to awe at. Never before has an artist seemingly endangered and disrespected their art in quite this way, in an institution such as the Guggenheim, none the less. As crazy as it may seem, this display is a symbol of Cattelan’s message as a retiring artist; a message of cunning rebelliousness towards the art world. If you are looking for another chronological retrospective in which the art is preciously nestled on the wall or on pedestals Maurizio’s All is not for you. If you are looking for a public hanging, shall I say, of the entirety of an artist’s work, come on down! With themes of dark humor, societal critique, the fear of failure, and death itself, the work seen in its entirety is a blast of comedy and tragedy.

This blast however is nausea inducing as well as innovative and clever. Those with a fear of heights will be challenged, as the viewer needs to peer over the small white barriers of the spiral structure to even glimpse any hint of detail within the pieces. This exhibition is certainly not meant to display the art as it was first intended. Seeing everything all at once is overwhelming and hard to stomach. The chandelier of his artistic career includes everything from his La Nona Ora (1999), a resin and wax sculpture of Pope John Paul II struck by a meteorite, to Him (2001), a kneeling wax Hitler.

La Nona Ora was originally exhibited at London’s Royal Academy on a red carpet surrounded with shattered glass giving the illusion that the meteor had crashed through the academy’s own window. The feeling and humor of the piece is altered when strung up and suspended from the ceiling, no longer in its context. Cattelan’s Him, a small statue of Hitler, meant to be placed alone in an empty room and approached from behind to trick the viewer into thinking they had come across a small boy, was placed on the outside of the installation face forward for all to see. Throughout the space were objects referencing past performances unable to be recreated and hung within the Guggenheim rotunda. For example, Torno subito (1989), hung amidst the chaos in memory of his first solo “exhibition” in which he closed a gallery and simply hung up a sign saying “Torno subito,” or “Be back soon.” Unfortunately the small sign is hard to pick out of the rubble so its inclusion is hardly noticed. Cattelan’s Pablo Picasso suit, Untitled (1998), reminiscent of a Mickey Mouse mascot at Disneyland, was once worn by a hired actor that stood outside the MOMA as if it were a sort of amusement park. This statement questioned the value of art as well as our perception of art in a museum as a society. Its shell is now positioned in a god-like stature between a giant foosball table, Stadium (1996), and a taxidermied horse, Untitled (2009). The pieces seemed to be more of a reminder of what they once were and stood for, which makes the installation more comparable to everything thrown in the kitchen sink than a career review.

The exhibition seems to be a catalyst for uneasy and controversial feelings. Cattelan specifically sought this unease throughout his career. Some of the most uncomfortable and obvious aspects of the work are the themes of suicide and death. These motifs run rampant throughout Cattelan’s work now hanging in the gallows of the Guggenheim. Life-size replicas of young boys on nooses, and a plethora of taxidermied animals such as dogs and horses are sprinkled throughout the space. The themes became more apparent while journeying up the spiral; they were impossible to overlook. You could say that Maurizio sent them all to their “death” just as an executioner would. Of course, this group hanging was not without Cattelan’s wit to provide comic relief to those faint of heart.

On a lighter note, the retrospective successfully challenged the way work is traditionally shown within the Guggenheim. Usually work is exhibited on the museum walls and adjacent galleries in a certain and rigid order due to the cyclical nature of the walkway and building. With All, the entirety of the work hung staggered in the center within the empty space, which left the remainder of the rotunda barren. This innovative curatorial choice solved the problem of showing the work in a specific chronological manner as most retrospectives do.

Another positive aspect of this display was the element of surprise and discovery while viewing the work from all angles. Smaller pieces were placed on top of bigger works making them only visible from overhead. Due to the enormity of the exhibition, the experience of traveling up the rotunda is dramatically different from the trip down. This is sure to spark interest even in the most attention deficient.

Did Maurizio Cattelan fail? Does he care? The overwhelming display of his life’s work seems like a final and unselfconscious release, a letting go if you will, of his successful career as an artist.
Posted by macey foronda. at 10:00 AM