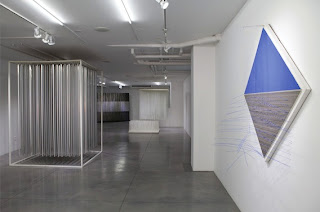 Soto Unearthed at Bosi Contemporary takes the discovery of a rare 1968 film of Venezuelan artist Jesús Rafael Soto as inspiration for an exhibition of five works Soto created in 1968-71. As art historian and curator Ariel Jiménez notes, these works represent “classic” Soto. The minimal, geometric sculptures are attempts at creating “vibratory situations,” a sense of energy beyond the works’ physical forms. As Soto claimed, “Every single line is looking for its dematerialization, all the time.” Thus, his pieces are meant to merge and interact with both their space and their viewers, to be both an environmental experience in and of themselves and fellow participants in that experience. Unfortunately, at this show visitors are not permitted to touch the sculptures, which detracts from the physical and spatial impact the artist intended them to have.

One of the first pieces in the show, 1968’s Rombo Cobalto, is a transitional one in the artist’s movement away from two-dimensionality. On the wall hangs a painted, diamond-shaped wooden panel. From the top point of the diamond, a thin rod extends from which falls a curtain of nylon threads, ending in a mobile-like sculptural creation consisting of dainty blue wires suspended in space. One immediately thinks of a puppet on a string, an object by definition intended to be manipulated rather than rigidly still. The threads invite touch, like the strings on an instrument or a cascading waterfall, and indeed, just a few feet down the wall, a film shows the artist running his hands through a similar river of nylon in another piece.

The 1968 film SOTO, created for the artist’s solo show at the Marlborough Gallery in Rome, depicts the artist literally immersed in his work—sometimes seeming to float with it in open space, sometimes with his face layered behind the work’s vibrating rods, sometimes strumming the pieces like instruments or caressing them like pets. The soundtrack of the film, which is allowed to echo freely around the gallery, is composed entirely of sound effects created by the pieces themselves. The artist’s voice occasionally intervenes, as he recites a poetic manifesto regarding contemporary art’s relationship to humanity. He sees “participation,” active engagement with the artwork, as imperative—not just for the artist, but for the viewer as well. 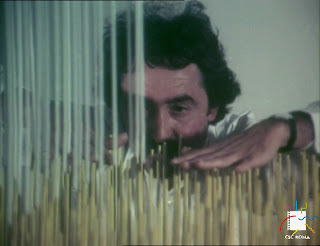 This desire for participation is nowhere more evident than in Soto’s Penetrable series. 1971’s Penetrabile Sonoro consists of a wooden frame holding a forest of hanging silver metal rods. This is the heaviest piece in the show, with its thick, squared-off rods standing in contrast to the delicacy of Rombo Cobalto. Nonetheless, both the film SOTO and the vintage exhibition catalogues on display show that spectators were just as delighted to engage with this piece as with similar installations of more insubstantial materials. This demonstrates that even with such a weighty presence, the addition of viewer participation brings about “dematerialization.” The piece dissolves into and merges with its environment and its viewers’ experience of the world, rather than being a static object. It is regrettable that visitors to Bosi Contemporary cannot have such an experience, but must make do with seeing historic photos or watching it on screen.

The film that inspired this exhibition adds indispensable depth to viewers’ understandings of the sculptures on display, as well as to Soto’s artistic practice as a whole. The film also has the effect, however, of inspiring desire to touch these pieces, to be as immersed in them as was the artist, but sadly, such immersion and participation is not permitted. This policy goes against the artist’s own goal to have his art “transform…into energy,” thereby frustrating a richer experience of the work.
Posted by Diana B. at 11:37 AM